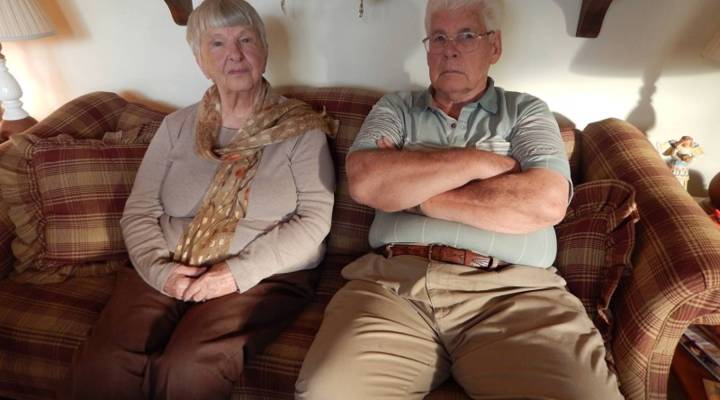 COPY
Norm and Betty Jo Anderson have lived in Piketon since the mid-1950s, when Norm started working at the Portsmouth Gaseous Diffusion Plant. Lewis Wallace

Norm and Betty Jo Anderson have lived in Piketon since the mid-1950s, when Norm started working at the Portsmouth Gaseous Diffusion Plant. Lewis Wallace
Listen Now

Norm and Betty Jo Anderson have lived in Piketon, Ohio, a tiny town in the Appalachian foothills, since the 1950s.

It’s a company town, but the major employer is not your average company. It’s actually a Cold War–era uranium enrichment plant that was once a giant federal project, the Portsmouth Gaseous Diffusion Plant. Norm Anderson worked there from the beginning and retired in 1999 — he says he had a reputation at work.

“I was called ‘Hard Head,’ because I had my way of doing things,” he said, laughing.

Norm and Betty Jo, who have been married since they were barely out of high school, sit on their brown plaid living room couch, often holding hands, constantly laughing and talking over each other. They’re serving as my Pike County history experts: Norm remembers the early days of the plant, when tens of thousands of people were on site to build huge structures, some of the largest in the world at the time.

“It’s hard to tell people of the magnitude of those buildings,” he said. The one he worked in had 33 acres to a floor.

“And those were concrete floors. Can you imagine pouring 33 acres of concrete?” he added.

But when Norm and Betty Jo talk about the plant, there’s a sense of nostalgia bordering on sadness. The plant stopped enriching uranium about 15 years ago. The technology for enrichment has advanced significantly. But almost 2,000 people go to work there every day just cleaning up the site. Now, even some of those cleanup jobs could be in jeopardy.

In the ’50s, Piketon and the nearby town of Waverly were boom towns: visiting workers were put up in shacks, and housing went up in rows almost overnight. The plant still employed thousands of people through the 1990s.

The enriched uranium was used for bombs in the early years, then later submarines and power plants.

We stand outside the web of chain link and razor wire that encloses the plant as we talk.  In the oldest building inside, there’s a Star Trek–type control room, with old-school analog gauges covering every wall. I met three guys whose job is to sit there in shifts, 24-7, monitoring for leaks in the old industrial equipment. In the newest building, that equipment is being cleaned and removed, each giant piece wrapped in thick plastic for shipment. Workers wear full hazmat suits, and truckloads of dinosaur-sized equipment leave here daily.

The view from a hill near the Portsmouth Gaseous Diffusion Plant. (Lewis Wallace/Marketplace)

“It goes to a DOE certified disposal site in Nevada,” Wagner said.

The Department of Energy oversees the project. On top of the contaminated machinery, the agency is dealing with chemical spills on the land and in the groundwater — the kind that were sort of routine back in the ’50s and ’60s, but are now known to be toxic.

The whole cleanup is expected to take at least until 2042, Wagner said. And, there’s the B-word.

“The timeline is really predicated on the budget,” he said. With a work slowdown, it could take until 2054 to get the Portsmouth site cleaned up.

The budget is what Fluor and Ohio’s senators have been jostling with the feds about—the money allocated to this cleanup has fluctuated. This summer hundreds of workers at the plant got layoff warnings and offers of buyouts, because the budget for fiscal year 2016 could go down about $50 million from the amount spent in the 2015 fiscal year.

Betty Jo and Norm Anderson say Piketon’s already struggling.  Nearly one in four people lives in poverty in Pike County, and problems with drugs and hunger have escalated as other industries have left.

The nuclear cleanup is one of the only things left bringing jobs and money into the area. In the 2000s, there was some hope that an experimental project enriching uranium with new technology on the Portsmouth Plant site would become a permanent fixture, but that project has been put on permanent hold.

And here’s the conundrum: if the cleanup slows down because of layoffs, that means a longer time living in the shadow of the Cold War. But when the cleanup finishes, hundreds of jobs will be gone forever.

“It’s not gonna affect us when that plant is shut down,” Betty Jo said. Norm is long since retired, and their four kids long since moved away. “Just everybody we love around here is going to go. And that’s sad.”

Ultimately, Congress will determine the budget, taking into account the request from DOE. Jobs here could also depend on how raw uranium sells on the open market: the project makes some money every year from unenriched uranium sales, and there are thousands of rusty barrels of that just sitting on the site.