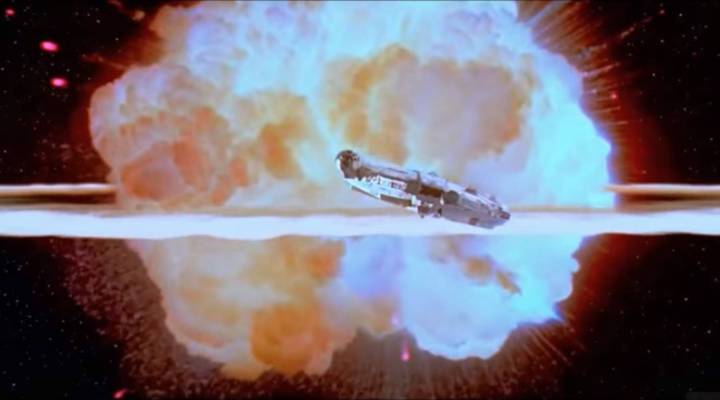 COPY
The second Death Star blowing up in "Return of the Jedi." Screengrab via YouTube

The second Death Star blowing up in "Return of the Jedi." Screengrab via YouTube
Listen Now

It is a dark time for the galactic economy. The Rebel Alliance’s victory in the Battle of Endor was decisive, but short-lived. With thousands of star systems on the brink of default, Jedi master Luke Skywalker must scrape together enough money to bail out the galaxy…

That’s how this month’s long-awaited “Star Wars: The Force Awakens” would open, if Zach Feinstein had his way. The Washington University assistant professor has crunched the numbers on the first six “Star Wars” movies and in a new case study out Tuesday, he’s concluded that the galaxy would need a bailout worth quintillions of dollars by the end of episode six.

To figure out why, let’s recap the story so far. Skywalker destroyed the Death Star, a moon-sized space station capable of blowing up an entire planet, at the end of the first “Star Wars” movie. By 1984’s “Return of the Jedi,” the Empire was building a second, larger Death Star. In a climactic battle, the rebels destroyed that too, and a reformed Darth Vader killed the evil emperor before dying himself.

That’s where Feinstein comes in. He’s a big “Star Wars” fan, and his research involves making mathematical models around national and global finances.

“Here I decided to apply it to a real financial system that just happens to be from fiction,” he says.

So what would those two Death Stars have cost to build? Feinstein looked up what the U.S. spent on its latest aircraft carrier, the USS Gerald Ford; around $17.5 billion. Since the Death Star is more or less a floating aircraft carrier that’s 140 kilometers in diameter, Feinstein concluded it would proportionally cost $193 quintillion to build. The second Death Star? More than double that.

To spin that number out and find Gross Galactic Product — like GDP, but for all 1.75 million planets in the Galactic Empire — Feinstein drew another comparison to the U.S. military: the Manhattan Project. He compared the portion of GDP that went toward developing the atomic bomb, and calculated GGP from there while researching the fictional banking system. Finally, Feinstein modeled the market impact of the Death Stars’ destruction and to the Dow’s drops after 9/11. As a proxy for the Emperor’s death, he examined the way markets briefly responded to a 2013 tweet from hackers using the Associated Press Twitter account saying the White House had been attacked.

After using his “Star Wars” knowledge to figure out real-world parallels, Feinstein charted the galaxy’s economic collapse using his existing research into systemic risk. Systemic risk is the study of national or global financial systems, not just banks or markets.

“So if I’m a bank… I owe you money, you owe me money. But if I go into default because someone blew up the Death Star, I’m now not able to pay you what I owe,” Feinstein says. “But you were counting on that money to be able to pay off someone else, so the loss of one bank can spread and amplify through the system.”

Using inter-bank liability models, Feinstein ended up figuring the Rebel Alliance would need probably need a bailout package of at least 15 percent of GGP to keep loss around 1 percent. Basically: it will cost something like $913 quintillion to keep the galactic financial crisis at Great Recession levels. So even when our heroes win, they lose.

Those real world parallels persist. Feinstein noted that during the Clone Wars — a period explored by recent “Star Wars” movies and TV, pre-dating the Galactic Empire — the galaxies banks were actually deregulated in order to keep funding a war. In his models, Feinstein didn’t totally bail out galactic banks that would have been too big to fail.

And if you find Feinstein’s lack of faith in the financial system disturbing, he said all of these figures were conservative.

Will the seventh “Star Wars” movie follow galactic financial regulators crawling out of financial ruin after its government has been completely destroyed? Probably not, but Feinstein  noted that the trailers don’t exactly show our heroes managing a stable economy. We won’t know for sure until the movie opens December 18.

“Maybe this is the route they decided to take,” Feinstein said. “I doubt that will be the case, but if it is I will be the one person who has truly studied this and can say ‘that makes sense.'”