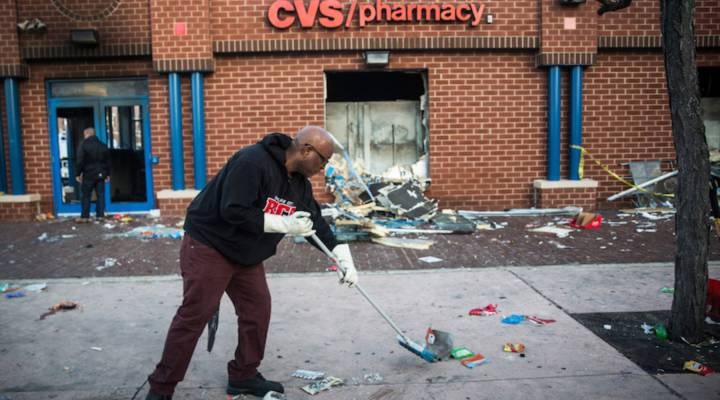 Baltimore businesses reopen with help from the city

COPY
Months after the unrest in Baltimore, the city's Economic Development Commission reports back on business recovering from the riots. Andrew Burton/Getty Images

Baltimore businesses reopen with help from the city

Months after the unrest in Baltimore, the city's Economic Development Commission reports back on business recovering from the riots. Andrew Burton/Getty Images
Listen Now

At Flawless Damsels, a women’s clothing and accessories store in Baltimore, the month of May is typically so lucrative that owner Taylor Alexander calls it “money making May.” So the protests in April were especially gutting.

“My business was completely vandalized and looted,” Alexander said. “I was left with only the paint on the walls. I had no windows, no doors. I had to replace the floors because all of the glass that they broke.”

Flawless Damsels sustained $60,000 in damage. And, after being closed for four months, Alexander estimates she lost another $100,000 in revenue.

She was able to re-open thanks to a grant from the Baltimore Development Corporation, the city’s economic development agency. The BDC distributed nearly $900,000 in grants and loans to businesses that sustained damage.

“[Our] services ranged from working with their insurance company to the more extreme of providing them with zero interest loans or a facade improvement grant to help them restore a broken door or a window,” Bill Cole said, the president and CEO of the Baltimore Development Corporation.

Cole said 93 percent of the approximately 400 businesses that were damaged have reopened.

Kirby Fowler is president of the Downtown Partnership of Baltimore.  That’s a non-profit that works to grow downtown Baltimore. Fowler said what worked there was investment in anchor institutions.

“Anchor institutions are something like hospitals or universities,” Fowler said. “Out in West Baltimore you have small businesses that dot different corners and blocks, but it is a great distance to those great anchor institutions.”

The city seems to have acknowledged that particular challenge.  Since the unrest, Baltimore has grown its efforts to train people for jobs outside of troubled neighborhoods and is planning for investments in transportation to get them to work.