Google’s data on when not to shop this Black Friday

Google’s data on when not to shop this Black Friday

If you’re sitting down to plan your Black Friday strategy — maybe making your spreadsheet of places to hit and when —  if you’re that kind of Black Friday shopper, then Google has some data to help make you more efficient.

Google tracked the movements of smartphone users during the holiday shopping season and put out an infographic about it Tuesday.

Apparently, early morning is actually the least crowded time in stores on Black Friday. Afternoon is by far the most crowded, so just take a nap then.

But the data also found that Black Friday isn’t the only big shopping day of the season. In fact, there’s quite a rush to discount stores and dollar stores for those desperation gifts on Christmas Eve.

Oh, and Google found that we’re wising up to whether Black Friday deals are really good deals. It said 82 percent of smartphone users will check their phones for a better price even when they’re shopping in stores.

And that is your data-driven seasonal shopping update for the week. 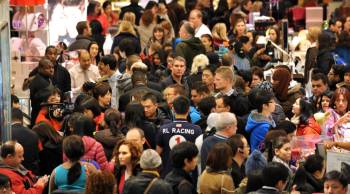