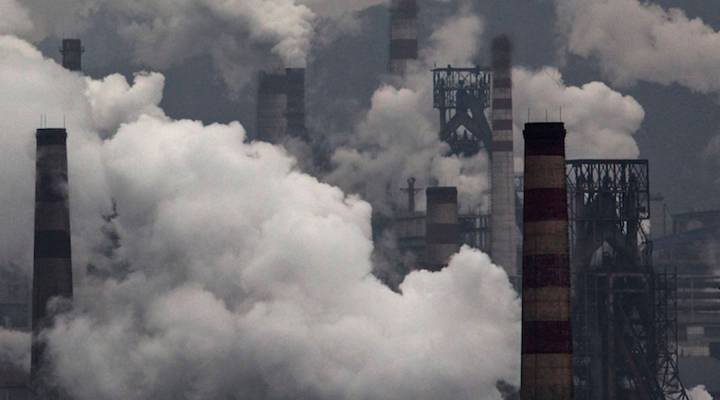 COPY
Smoke billows from smokestacks and a coal-fired generator at a steel factory in the industrial province of Hebei, China. Kevin Frayer/Getty Images

Smoke billows from smokestacks and a coal-fired generator at a steel factory in the industrial province of Hebei, China. Kevin Frayer/Getty Images
Listen Now

Nearly 200 country representatives are about to descend on Paris for this year’s high-profile climate change summit. Each country brings its own pledge to cut emissions, and at the meeting everyone commits to following through and perhaps doing more. But to many social scientists following this, particularly economists, this whole way of doing things suffers from a fatal flaw. They call it the “free rider” problem.

Let’s be honest. If there’s a big group project, some of us might be tempted to sit on the sidelines and mooch off everyone else’s work. That’s what’s called “free-riding.”

And to many economists, this problem dooms climate talks as they’re currently configured.

“Countries have an incentive under Kyoto-type agreements, and all the agreements since then, to talk as if they are going to do something, and then do very little,” said Yale economist William Nordhaus, an original architect of climate change economics frequently on the Nobel shortlist. “And ride free on the efforts of others.”

A few examples of free-riding: Jumping the turnstiles on the subway, leaving dirty dishes in the sink for others to wash, not pitching in for pizza.

“Or in military systems where you see something like NATO,” Nordhaus said, “where other countries are free-riding off the military power and spending of the United States.”

He said the reason people and countries free ride is basic self-interest: The cost of doing something can be far bigger than the benefit. Cutting carbon pollution typically works this way.

“What countries are being asked to do is undertake costly steps, install renewable energy systems,” Nordhaus said. “But the benefits spill over all around the world and not dependent on whether they participate or not.”

Some might cast this problem as one of greed. But as an economist, Nordhaus doesn’t look at how people should act. He looks at how they actually act, in both the real world and the economics lab.

“I run this game, cooperation game, in class,” Nordhaus said. “I actually ran it with Yale faculty. It just have been run thousands of times. It always differs a little bit but, in general, the finding is, most people don’t cooperate, some people do.”

One of the underlying issues when it comes to climate talks, is the way international agreements work.

“The basic problem is sovereignty,” said Scott Barrett, natural resource economist at Columbia University. He’s studied decades of global environmental talks and treaties. Barrett notes one country can’t force another to do anything.

That’s exactly how climate talks have gone, since the inaugural U.N. Framework Convention on Climate Change in 1992. That was a voluntary deal. Five years later in Kyoto, the world’s rich countries reached a binding treaty, but to critics, it was like a binding speed limit with no fines.

Negotiators in Kyoto tried to include penalties for backsliders, but failed.

“It actually never went very far, said Eileen Claussen of Elon University, a member of the U.S. delegation at Kyoto. “I think it’s very hard in international agreements to figure out a set of penalties. Because in the end you couldn’t get enough countries to want it.”

During and after the Kyoto talks, China, an emerging economy, stayed on the sidelines. And the United States signed the protocol, but didn’t even submit it to the Senate for ratification.

“The combination of looking at the U.S., the largest emitter, and China the second largest emitter at that point, not really participating fully I think did give some impetus to countries like Canada, who said ‘I’m not doing it either,’” Claussen said.

Indeed, Canada withdrew from its Kyoto pledge in 2011. And last week the U.K. government indicated it might miss its targets, as it cut back subsidies for renewable energy.

“So long as there are almost any free riders,” Barrett said, “these people have a corrosive effect on cooperation by the cooperators. And the cooperation just drops over time.”

Fundamentally, Barrett argues something big is missing from these talks: They focus on climate science — oceans, glaciers, emissions, timelines – but don’t address climate negotiation science. That is, the social science of self-interest, cooperating and free-riding.

He and Nordhaus argue it’s time to scrap the whole structure of these talks. To start over and construct a new system that flips the incentives. Nordhaus has proposed what he calls a “climate club” structured like a trade deal, where countries want to be in, and get hit with sanctions if they don’t participate.

“I think I have significant difficulty with that,” said Claussen, a veteran of many global climate negotiations. She said Nordhaus’s proposal is politically untenable.

“I’m not sure that I would like to replace something, even though it’s not been successful, with nothing,” Claussen said. “Because I think that’s worse.”

Indeed, at the Paris talks, negotiators will stay the course, pledge emissions cuts, add them up and hope to be more ambitious tomorrow.

Correction (Oct. 8, 2018): The original version of this story misspelled  Eileen Claussen’s name. The text has been corrected.