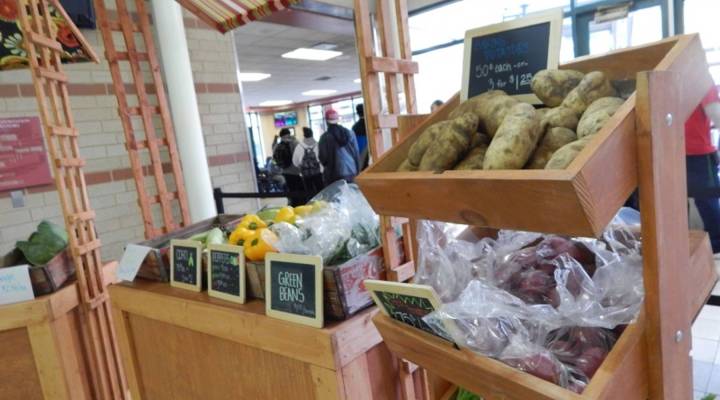 In Dayton, taking fresh food to the bus stop

In Dayton, taking fresh food to the bus stop

On a bus ride from on the northwest side of Dayton, Ohio into downtown, you can go seven miles on a major thruway and see only one full-service grocery store — a Kroger pretty far out near the edge of town. Otherwise it’s liquor stores, dollar stores, and not much else.

But at the downtown Dayton transportation hub, there’s a farm stand set up right on the linoleum floor of the bus station. Carrots, potatoes and cabbages overflow from wooden bins just across the plaza from a Golden Fish & Chicken and more than one burger joint.

As many as 18 million people in the U.S. live in a food desert—defined by the USDA as a low-income area with limited access to a grocery store. A lot of efforts at fighting food deserts have focused on getting grocery stores and farm stands out into neighborhoods. But this new approach flips that by putting fruits and vegetables right in the middle of town, the bus hub in Dayton, Ohio.

Judy Lewis is filling up a brown paper bag with spinach and broccoli. “I just mix ‘em up and make my own little salad for lunch at work,” she said. She’s a cosmetologist, and her makeup matches her purple sweater.

The farm stand also plans to offer cooking and nutrition classes, to show people how to prepare the produce. (Lewis Wallace)

Lewis works inside a Wal-Mart, and comes through the bus hub on her way there—she was excited when she learned there would be a fruit and vegetable stand here. “I was watching the news and they mentioned this and I said, ‘Well, it’s about time,’” she said, laughing. She uses an EBT card—food stamps—which means for her, everything here is two- for-one through a voucher program.

Much of Dayton is considered a food desert, said Judy Dodge, a Montgomery county commissioner. “There are so many people that cannot get fresh fruits and vegetables because they don’t have good access to grocery stores,” she said.

She’s on a public health committee that decided it would be a great idea “to put something downtown locally close to the bus stops, so that people can come in, grab some fresh fruits and vegetables, get back on the bus go back to work or go home.”

The Market at Wright Stop Plaza opened in September. It’s open three days a week in downtown Dayton, which is itself largely a food desert. This is a pretty novel idea for a smaller city.  Atlanta’s transportation system has something similar, but you normally don’t see a bus stop farm stand outside of places like New York and L.A., and those are usually privately run. This one’s a partnership between the bus system, the county and a homeless services organization.

April Easterling is on her way out of the market—she had been waiting for the market to open.

“I had to get some grapes and bananas and tomatoes,” Easterling said. “I’ve been waiting for it to come.”

Before the market was here, she said she didn’t really shop for produce. But that’s probably somewhat unusual: A new study on food deserts from the non-profit National Bureau of Economic Research found that changes in access don’t necessarily change people’s shopping habits. In other words, a farm stand at the bus stop won’t magically make lots more people buy veggies. Largely, it’s a convenience for people like Judy Lewis, the cosmetologist, who was going to buy veggies somewhere anyhow.

Commissioner Judy Dodge said she’s aware of that, and so to encourage people to buy and cook the food,  the new market will also offer cooking and nutrition classes. “We are prepared for that, and to basically show the individuals as they come off the bus, this is what you can do with a turnip. Fifty ways to cook a chicken. You know, this isn’t gonna solve all the problems for everyone. But at least it’s a step.”

Next step? Making sure the store breaks even.