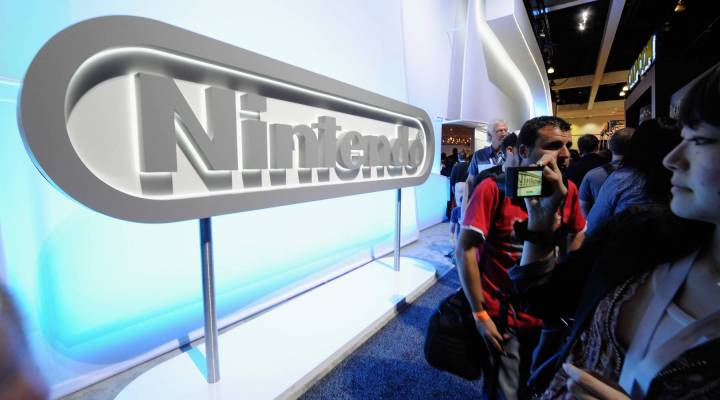 COPY
Pioneer electronic game developer Nintendo has been losing its edge as Apple products and smartphones become popular for gaming. So instead of trying to beat them, it's joining them. Kevork Djansezian/Getty Images

Pioneer electronic game developer Nintendo has been losing its edge as Apple products and smartphones become popular for gaming. So instead of trying to beat them, it's joining them. Kevork Djansezian/Getty Images
Listen Now

Until now, Nintendo has stuck to making games for its own hardware, like the Wii and the Game Boy.

“It is the classic razor and blades analogy from Econ. 101,” said Jeff Ryan, author of “Super Mario: How Nintendo Conquered America.”

“If they start making blades for other people’s razors, they will go out of business making razors.” Ryan said Nintendo didn’t want or need to make games for other companies’ devices.

But things have changed. Increasingly, people play games on smartphones.

“A lot of people don’t want to shell out a couple hundred dollars for another device when their smartphone already cost an absolute fortune,” said Heloise Thomson, a research analyst with Enders Analysis.

What’s more, there’s a new crop of emerging gamers, and they are smartphone natives.

“When they first came out, only people with jobs and credit had smartphones, but now with all these $100 family plans, people are buying smartphones for their 10-year-olds and 12-year-olds,” said Michael Pachter, a retail analyst at Wedbush Securities.

And that’s the market, analysts said, Nintendo needs to tap into in order to grow.