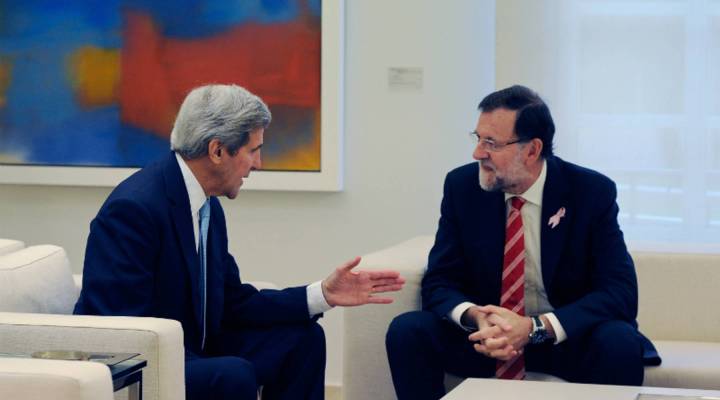 It’s time for a new round of trade talks: T-TIP

COPY
Spanish Prime Minister Mariano Rajoy chats with U.S. Secretary of State John Kerry before a meeting in Madrid on Monday. One of their key discussions included the Transatlantic Trade and Investment Partnership. Denis Doyle/Getty Images

It’s time for a new round of trade talks: T-TIP

Another week, another set of trade negotiations. This time, European and U.S. representatives have gathered in Miami for the 11th round of negotiations on the Transatlantic Trade and Investment Partnership. These talks come on the heels of the conclusion of negotiations for the Trans-Pacific Partnership earlier this month, though the deal still needs to be approved by Congress.

However, should both TPP and T-TIP be implemented, their impact will be far-reaching, said John Gillingham, a fellow at Harvard’s Center for European Studies.

“The implications extend far beyond talks about trade and tariffs,” Gillingham said. “It’s going to provide a sort of economic constitution globally.”

Moreover, ongoing European negotiations look very different from recently concluded Pacific ones, said Susan Ariel Aaronson, a professor at George Washington University. “Basically, these are wealthy industrialized countries with good governance and so we’re really arguing over the type of regulation and how to regulate.”

“Interestingly, I think this deal is harder for the Europeans than it is for the Americans,” said Edward Alden, a senior fellow at the Council on Foreign Relations. “We clean our chickens, for instance, in mild chlorine baths to get rid of bacteria and other things. The Europeans find that appalling. We eat all sorts of crops made from genetically modified seeds. Europeans consumers don’t like that at all.”

In fact, there have already been a series of protests against T-TIP in Europe, including at least 150,000 people in Berlin earlier this month.