How much is Donald Trump actually worth?

How much is Donald Trump actually worth?

Just a few weeks after a lackluster debate performance gave way to hints of an exit strategy, Donald Trump’s presidential campaign is going stronger than ever. The latest poll numbers show the real estate and entertainment mogul in a commanding lead — only Ben Carson, another outsider, is even close.

The new surge finds Trump campaigning more aggressively in the South and continuing to taunt rival candidate Jeb Bush, this time about 9/11. Talk of a Trump slump feels as distant a memory as the low-five he and Bush shared on the debate stage.

With Trump’s front-runner status secure — he and Carson have reportedly applied for Secret Service protection — speculation around his net worth has continued. In an excerpt published in Newsweek Monday from his updated Trump biography “TrumpNation,” Timothy L. O’Brien added his own unique perspective.

When “TrumpNation” was first published a decade ago, O’Brien pegged Trump’s fortune at $150 million to $250 million. An incensed Trump sued O’Brien for libel, demanding $5 billion in damages — a number in-line with what Trump said he was worth back then.

Jump ahead to the 2016 presidential race — on the other side of the Great Recession — when Trump has boasted that he’s worth $10 billion. Forbes, meanwhile, has him at $4.5 billion. Documents from Trump’s camp put his net worth at $8.7 billion, with $3.3 billion alone from “real estate licensing deals, brand and branded assets.” A tool from U.S. News and World Report helpfully reminds us that — assuming you have the national median net worth of around $70,000 — “Donald Trump spending $124K is the same as you buying a banana.”

Why can’t anyone figure out what Trump is worth? A 2006 deposition from his suit against O’Brien might provide an answer:

Q. Let me just understand that a little bit. Let’s talk about net worth for a second. You said that the net worth goes up and down based upon your own feelings?

Q. When you publicly state what you’re worth, what do you base that number on?

A. I would say it’s my general attitude at the time that the question may be asked. And as I say, it varies.

The judge dismissed the lawsuit.

For now, the best answer to “How much is Donald Trump worth?” is still “It depends.” 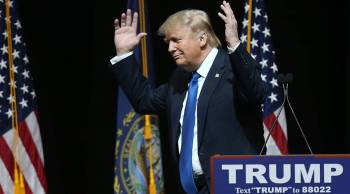