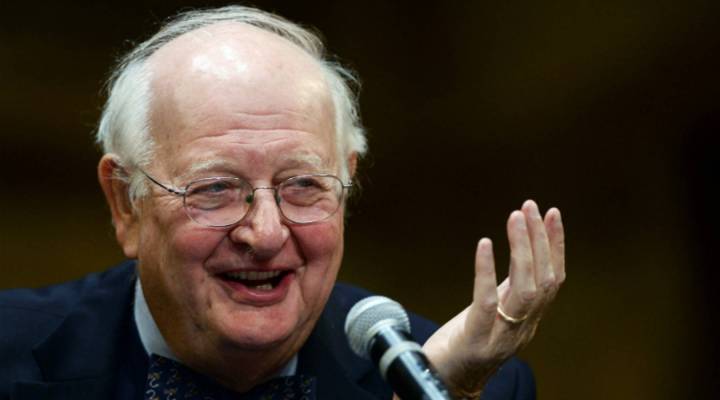 COPY
"There are still 700 million people who are poor," Princeton economist Angus Deaton said at a press conference after his Nobel Prize was announced Monday. JEWEL SAMAD/AFP/Getty Images

"There are still 700 million people who are poor," Princeton economist Angus Deaton said at a press conference after his Nobel Prize was announced Monday. JEWEL SAMAD/AFP/Getty Images
Listen Now

This year’s Nobel Prize in economics has been awarded to Angus Deaton.

Deaton is a Princeton economist who has spent much of his career trying to improve the way we measure very important things — like what counts as poor and what the value of a dollar is in, say, India versus Manhattan.

Earlier this month, the World Bank announced that the rate of people living in extreme poverty worldwide will likely fall to below 10 percent this year for the first time in history. Nobel Prize winning economist Angus Deaton had something to say about that Monday in a press conference at Princeton celebrating his Nobel Prize.

“That’s wonderful,” Deaton said. “But there are still 700 million people who are poor.”

Much of Deaton’s work has focused on the lives of people in developing countries like India. Charles Kenny, a senior fellow at the Center for Global Development, sees a central question at the heart of Deaton’s research.

“Why are some people in the world still living lives that are as poor as anybody through history, while many of us enjoy a lifestyle and a quality of life that is unheard of?” Kenny asked. “And what can we do about that?”

In order to identify policy solutions to poverty, economists and government leaders must first know who is poor. Deaton’s research has illustrated how difficult that can be to determine.

William Easterly, a professor of economics at NYU, said Deaton has made advancements in measuring who is poor by starting with the acknowledgement that money buys different things in different countries.

“Is a dollar in Ghana the same as a dollar in the U.S.?” Easterly said. “Of course not, because the prices are different. He corrects for that and comes up with these very careful measurements of global poverty.”

Deaton is also known for his use of household surveys and for looking at what individual families consume in relation to what they earn. Other economists look primarily at the data of large groups of people. Over time, the Nobel committee said, Deaton’s micro-data has changed how we understand the macro-economy.