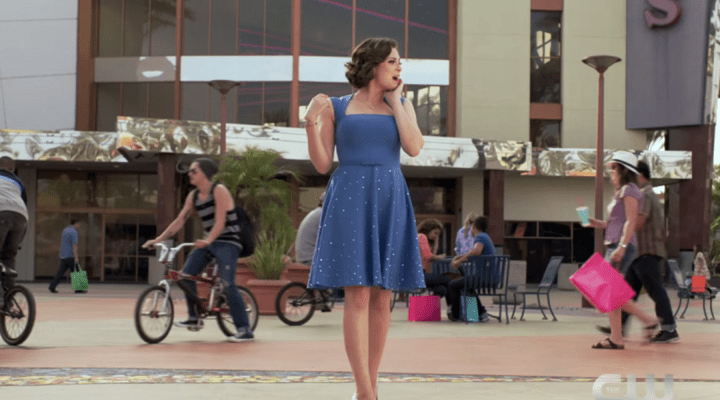 There are some cities — Los Angeles, New York, Chicago, Baltimore — that seem to get all the good TV roles. It’s rarer that a smaller city — a suburb even — gets a starring role, especially playing itself.

The town, with its slightly dated feel and population of around 110,000, is the co-star of the new musical series “Crazy Ex-Girlfriend” on the CW.

The show centers on a depressed young lawyer who runs into her childhood crush on the streets of New York. When she finds out he’s moving to West Covina, she follows him there. And the running gags about the city begin. There’s the one about West Covina’s proximity to the beach — just under two hours, or four in traffic. (Actually, as everyone in West Covina will tell you, the beach is much closer than that. At least most of the time.).

There’s the city’s snack obsession — three pretzel places alone in the mall, just in case you can’t make it from one end to the other without needing a pretzel pit stop midway. The first episode of the show has a big musical number where the star, Rachel Bloom, sings atop a giant pretzel.

West Covina “struck us as the perfect place to depict what a contemporary American suburb is like,” said Aline Brosh McKenna, co-creator and executive producer of “Crazy Ex-Girlfriend.” The city has a diverse population, a solid collection of big-box stores and a shopping mall of which the whole town seems proud.

But there’s something else that drew the show to West Covina, Brosh McKenna said: “I loved the sound of it. It’s a great word for Rachel to sing and build a song around. So by now it’s quite beloved to us. I think I’ve lost all objectivity about how it sounds to others.”

West Covina Mayor Fredrick Sykes is happy the show is filming in West Covina, whatever the reason.

According to Sykes, the city makes a few thousand dollars in shooting fees per episode.

But given how much people like television, he thinks there could be an even bigger payoff.

“People will think,  ‘Hey, where are they filming at? They are filming in West Covina,'” he said. “They may go there to drink, and shop, and look, and see if the cameras are rolling.”

And how do people in West Covina feel about being a bit of a punch line in the fish-out-of-water story?

There was a time, he said, “when you told people, ‘West Covina,’ and nothing really good came after it.”

But all that’s changing, Mancuso said. The graffitti has been painted over, stores are moving into empty spaces, pricey new apartments are going up.

“It’s very cool to be a part of the positive things that are happening in this town,” he said.

And now West Covina has earned itself a starring role.

Some fast facts about the city: