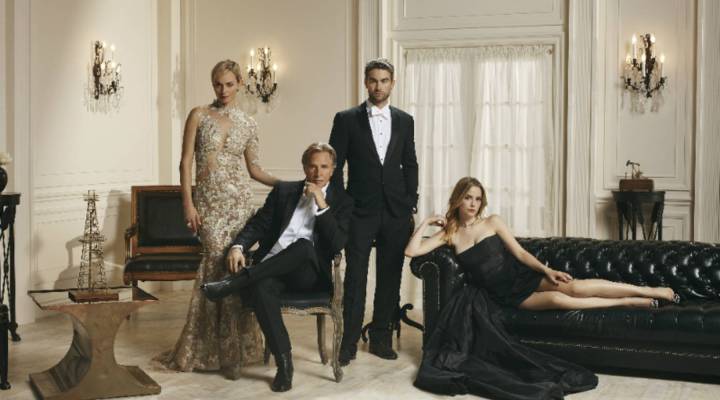 It may have taken him four years, but writer Rodes Fishburne knew the oil boom up in North Dakota would make for good television. And ABC agreed. “Blood & Oil,” which he co-created, airs on Sunday nights.

On how he came up with the idea behind “Blood & Oil”:

I read a story about the largest oil discovery in American history, which is happening right now in North Dakota. And I called a friend of mine up named Josh Pate who is a screenwriter and I said, “I think there’s a television show in this idea of a sort of Wild West boom town happening in a place that most Americans have never been.” And ABC bought it, and we were thrilled, and we were off to the races. So that began the process, and then it took four years to make it happen. I think of ourselves as an overnight success four years in the making.

On the oil industry not being what it used to when he first created the show:

I’ve been up there twice, and I’ve gotten a really good look at different time periods up there from the actual boom period to shortly after that. I can tell you that our show is not set literally in the present moment. It’s probably three and four year in the past, so we’re playing with that a little bit. But truth has caught up to fiction with us. We had a whole storyline about the Saudis cratering the price of oil in our show and using that as a story to tell in future episodes, and the reality is that happened in real life so we do feel that oil time and dramatic time are often trying to outrace each other.

On what it was like when he went to North Dakota for research:

Oh, my goodness, it was the most amazing place on earth. It was San Francisco 1849 Gold Rush set in the middle of the prairie. You could see all 50 U.S. license plates in about 20 minutes. McDonald’s was paying $25-$30 an hour at the take-out window because they couldn’t get anybody to work there, because you could make more money driving oil trucks back and forth on the oil fields. One of the observations I had about being up there was that boom towns only care about if you’re willing to come up there and really work hard. They don’t care where you went to college. They don’t care who your dad was. They care if you’re there to work. That was fascinating to watch in the wake of ’08, because this was really an oasis of a place that just wanted as many hardworking people as it could find, so it was a fascinating place. When we initially pitched this idea, we pitched it as a “Fargo” meets “Deadwood,” and the real place was very much like that.

On similarities to the show ‘Dallas’:

The thing that drew me to this project was the boom town speculative mania of this place…. You can make an argument that America itself is built on a series of booms that get us excited about things and provide our expansion west. This North Dakota boom is just following in the template of other booms that have come and gone. We’ve known that there’s a lot of oil in the Bakken for a hundred years, but it wasn’t until recently that we were able to get it and trigger this most recent boom. That was what drew me. In boom towns, people will do things and go for things, and take risks that they normally wouldn’t take because the stakes are higher.

On the differences between writing for television and writing novels:

Oh, it’s been great! The fun of television is the collaboration with really talented people. The fun of novel writing is to sit in a room by yourself and figure out what it is exactly that you want to do. The fun of television writing is being able to collaborate and bounce ideas off of different people, and together you equal this sort of magic golden mean where one plus one equals three, and that’s really been fun to plug in and be a part of.

On whether or not TV needs another soap opera:

I think we need this nighttime soap opera for sure. The other ones, I’m not so sure about.