More From This Show
0:00 / 0:00
With midterm elections approaching, help us make everyone smarter about the economy. Donate Now
Video

Two September fires in California killed six people and destroyed more than 1,300 homes. Thirty-thousand people had to flee. The Valley Fire, north of San Francisco, was the third-most destructive in the state’s history.

Four years ago, Bastrop County, Texas, suffered the most devastating fire in state history. Fifty square miles and nearly 2,000 houses burned, just half an hour outside of Austin. Afterward, residents faced a choice: rebuild or hit the road.

Melissa Bishop left the city and moved out to Bastrop about 20 years ago.

“You know, I don’t want to live in an exurb of Austin,” she said, “and the whole thing is coming this way, with the suburban houses and the big-box stores and the traffic jams. It’s coming.”

Bishop worked as a nurse in downtown Austin, but commuted an hour every day to live in the pines. Bastrop State Park is almost 10 square miles of pines, which makes it susceptible to fire. The Bastrop Complex Fire in 2011 burned about 95 percent of the park.

“If you look over there on the horizon you can see completely burned, dead trees,” she said. “That was a crown fire. Like a horizontal tornado rolling through the forest that’s so hot that it explodes the trees in front of it.”

Jarad Milton watches his friend of 30 years, Melissa Bishop, tell her story of running through a wall of fire to get back to corral her animals and take them to safety. Milton and Bishop had to sit in Milton’s truck because the smoke surrounding Milton’s ranch house was too thick to drive through.

She was renting land next to the park. She owned a cabin, but didn’t have insurance. Now all that’s left is a mailbox.

She got $32,000 from FEMA and bought some land in Oregon, where she hopes to move by the end of the year.

But Bishop is the exception. While a lot of people didn’t rebuild on the same piece of land, Bastrop didn’t lose population or school enrollment.

The city of Bastrop is the county seat. The fire just hit the edge of the city; nearly all of the destroyed homes were in the county.

Officials are trying to assure those who rebuilt that they’re ready for the next one. There will be a next one, said Bruce Woods, head of mitigation and prevention at the Texas A&M Forest Service.

“We can’t stop all fires,” he said. “Fires are going occur. We’re going to have ignition starts. It’s how we prepare our homes that’s going to make the difference.”

Four years after the most catastrophic fire in Texas history, these loblolly pines, post oaks and junipers less than a mile from the 2,000 acres of Bastrop State Park are still scorched.

Subdivisions are sprouting all along Highway 71 among thousands of burned trees. Woods thinks these communities need to be planned better and builders need incentives to build fire-safe homes.

“There are numerous areas where we’ve had catastrophic fires in Texas, and properties were rebuilt with the same type of materials and the same landscaping as before the fire,” Woods said.

That’s what Bastrop resident Ginny Pickering did; she built the same house on the same lot.

“My daughter-in-law called the builder who had built our home, which was only five years old, and told him what was going on,” she said. “And he called me and said, ‘Ginny, if you want to rebuild, I’ll put you at the top of my list.’ So we decided to rebuild. So we used the same floor plan and everything. We just rebuilt the same exact house. We did everything we could to get it back the way it was.”

She said she didn’t do anything to make her home more fire-safe, but she’s not sure it would have made much of a difference.

A few miles down the road is a community called Tahitian Village, where there are plenty of lots where only chimneys remain. People who live out here aren’t farmers and ranchers; they’re living on quarter-acre lots in modern-looking houses.

Jan Kuchel has been in her house for 21 years.

“My house is made of wood, and it’s old,” she said. “It’s about 20, almost 30 years old, but it’s also got asphalt shingles that have been replaced a couple of times.”

Kuchel knows she’s lucky that her place didn’t burn down, because so many in her neighborhood did.

She was excited when she heard her house was OK. But it was hard to go to the store and talk to her neighbors, because she felt guilty.

“You know, anytime I would say, ‘No, my home is there,’ you would see almost disappointment in their eyes because it felt like, ‘Oh, I don’t have a comrade here,'” she said. “And there was a point in time when people would say, ‘Oh, you didn’t lose your home, you’re fine then,’ and I would just want to punch them.”

Melissa Bishop bought this milk cow, Daphne, with the money she was given after her milking goats died in the Bastrop Fire four years ago. In order to get the money from the USDA, Bishop had to show photos of the goats’ burned carcasses.

Kuchel spent $50,000 to repair damages her insurance company wouldn’t cover. Her siding was warped, she replaced all her carpet and she repaved the driveway because the fire was so hot it melted the asphalt.

Her survivor’s guilt eventually went away. She knows the people in her community much better. She had plenty of reason to see them, because county and state officials held seminars on how to make homes safer. She and her neighbors even organized meetings to talk about how to get out in case of another fire.

As thousands of people look for tranquility in the piney woods outside of Bastrop, Kuchel said she hopes they can take something from her shortsightedness, especially those coming out from the city.

“You can give them a little leeway for being dumb,” she said. “But I don’t get any excuse.” 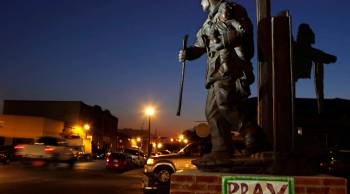 After natural disasters, this small Texas city is putting the brakes temporarily on development