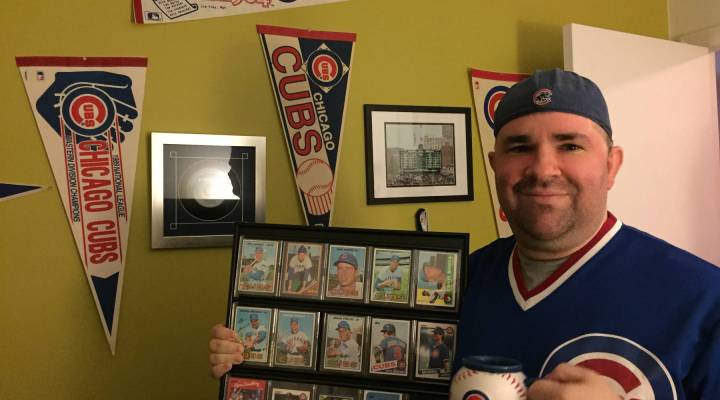 I was born in Chicago. We moved away when I was relatively young, but I’ve always missed my home town, finding any excuse to keep my Chicago roots strong. I frequently accomplish that through eating shameful quantities of meat, but most of the time it’s through — God, help me — the Chicago Cubs.

If there are multiple levels of fandom, I fall firmly into the “needs help” category. I’m that guy who gets wary looks when someone comes into my office for the first time and sees “A Beautiful Mind”-like collection of Cubs memorabilia.

This being Marketplace, I thought it’d be a useful exercise to sum up all the money I’ve spent — whether I had it or not at the time — on the Cubbies over the years.

Thirty-five dollars is how much I spent on the frame for this rare 45 of the 1969 Chicago Cubs classic, “Hey Hey, Holy Mackerel.”

I know what you’re thinking: “That’s pure gold!” The Cubs were supposed to win it all that year. They didn’t.

And then I have about 10 collectable pennants, about $100 total, including one from 1984 that celebrates the World Series champion Chicago Cubs. It was supposed to happen that year too … it didn’t.

My Cubs baseball card collection, around $200.

Let’s pencil in $3,000 for various tickets to Cubs games, home at Wrigley Field, or away at whichever city I happened to be living in when they came to town. Beer and meat at those games felt like $4,000, but I guess it was really around $250.

And then there’s all the Cubs bric-a-brac: mugs, pens, baseballs, T-shirts, hats, collectible this-and-thats. I‘ll estimate all that at around $750.

And now, here I stand, staring down the financial abyss of a potential championship run.

If they beat the Pirates and advance to the National League Division Series to face the Cardinals, the hated Cardinals, I might just need to plan a trip to St. Louis.

If they beat the Cardinals and advance to the National League Championship Series and play for the pennant, it’s time to raid the savings account.

And good lord, if they make it to the World Series?

I will be in Chicago. I will be at Wrigley Field.

I have no idea yet how I’d afford that.

Anyone out there want to buy a kidney?