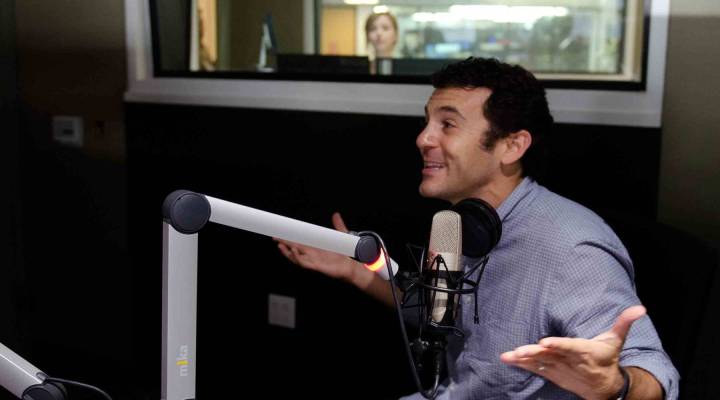 COPY
After many years behind the camera, Fred Savage is returning to TV for Fox's "The Grinder." Tony Wagner/Marketplace

After many years behind the camera, Fred Savage is returning to TV for Fox's "The Grinder." Tony Wagner/Marketplace
Listen Now

On which job he prefers:

I like that all. I know that’s such a bogus answer, but I really do… I mean I have been working in the TV business since I was 6 years old. I was an actor for a long time, and I always wanted to be a director. And I went and I worked really hard, and I kinda built that career up, and that turned into producing and directing. And then this … new acting gig on this new show was not part of the plan … came out of the clear blue sky, and so now I’m doing that.

On why he deferred accepting the “Grinder” role:

So a friend of mine, who, our daughters are in school together, he’s like, “I have this great script. You should read it.” So I read it, and I’m like “Oh, my God, this is fantastic, it’s hysterical.” And I said, “I’d love to direct it. Let’s do it.” He goes, “Oh no, no, this is for you to act.” I was like, “Oh no, that’s not in the cards for me, I kinda left that behind.” And he goes, “Well, just consider it,” and I was like, “Look”… I said, “we’re gonna know each other for a long time.” Our daughters … are in first grade … so what’s the best way for me to say no? Like what’s the least painful way? Like I don’t want to be a jerk about it. He’s like, “Well … come and meet the guy.” So I went, and I met with him and the guys who wrote it and the director, and I left the meeting, and … it was really fun. And now the fact that I get to spend even more time collaborating with and working with this group of guys that I really, really like and feel really comfortable with, I couldn’t be more thrilled.

On wanting to direct when acting:

You know I very gladly and willingly and surprisingly easily turn that off…. I mean I feel like when you go in as an actor, … the breadth of your responsibility is very limited compared to a director. I need to be on time. I need to know my lines. I need to hit my mark and like, not be a jerk. Like, those are kind of the four big pillars. And you know, as a director, you’re worried about so many things … not just what you have to do, but you’re worried about the actors and the camera and the wardrobe and the sets and the lighting and later on the editing, and there’s such a breadth of responsibility and oversight that you have to have over every department, that to just focus on one little thing and really dive deep into it, it’s … really engaging, and it’s kind of relaxing.

On working with Rob Lowe:

I think that it was really one of those things that … we just lucked into. And there couldn’t — there’s not a nicer guy, there’s not a harder working, more generous guy than Rob, and I’ve just loved going to work with him every day. And our characters kind of, you know, butt heads a bit, and so we kind of rile each other up and play off each other, and it’s been a lot of fun.

On thinking vs. doing:

You know, that is really the crux of the whole thing. I mean you really nailed it, Kai. That’s … the key to everything, is to not think about it too much. … You try and kind of lose yourself in it a little bit. So you’re not … thinking about what you’re doing, and you can just kind of react in a real way. So that’s why, you know, there’s basic stuff. That’s why it’s, like, so important to know your lines, because I’ve worked as a director with actors who don’t know their lines, and you can see them searching for their lines, so, I mean I’ve done it since I was like a little kid. Like you find ways to cover that you don’t know your lines to stall til you find the next line. But you’re making a decision based on “What’s my next line?” rather than what’s the “How would I react in the scene?”

I’m doing a comedy … you know, a half hour comedy on TV. I’m not … Daniel Day Lewis. I’m not gonna go live in the woods and learn how to, you know, use an ax. But … from learning your lines, which is a very basic thing, to what Daniel Day Lewis does, all those contribute to trying to clear as much of yourself out of your head and just kind of forget the way you sound, and the way you act and what you’re doing with your hands … and it, it’s very difficult.

On going beyond comedy:

Yeah I mean, sure…. Look, I had no interest in doing a television show two months ago, so who, so who knows…. Whatever you do in any creative endeavor … you want to try and stretch yourself…. Right now, doing this show, you know, it’s a comedy and that’s what I’ve been doing for a long time, but just going back and doing that again, uh, and, trying to forget what I sound like as you pointed out … that’s enough for me right now. I think, you know, if we continue doing that and I’ll start to itch and maybe I will wanna go live out in the woods and learn how to use an ax, but for right now, I’m really enjoying what I’m doing, and this is total proof that, don’t make any plans. Don’t say never. Don’t do anything. Just stay open and, I don’t know, say yes when things come along.