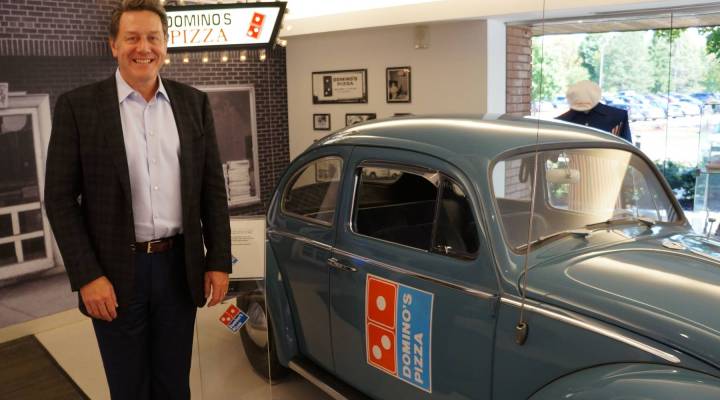 COPY
Domino's CEO J. Patrick Doyle stands in front of the car the Monaghan brothers used to deliver pizzas when they opened up their first Domino's Pizza, then called DomiNicks, in 1960. Tommy Andres
Corner Office

Domino's CEO J. Patrick Doyle stands in front of the car the Monaghan brothers used to deliver pizzas when they opened up their first Domino's Pizza, then called DomiNicks, in 1960. Tommy Andres
Listen Now

If you were asked what the top three e-commerce sites are in the world, what would you guess? Amazon? Check. Apple? Yup. But there’s a good chance your third guess is wrong, at least according to Domino’s CEO J. Patrick Doyle.

We believe by transaction counts we’re in the top five of e-commerce companies in the world. We know we’re behind Apple and Amazon, but we may be as high as third.

Large screens in Domino’s tech offices show up-to-the-minute sales numbers at the company’s 12,000 restaurants across the world. The company also tracks on which platform customers are ordering.

Domino’s is the second-largest pizza company in the world behind Pizza Hut. The company sells a million pies a day at more than 12,000 restaurants around the world, and one in eight pizzas purchased in the U.S. is from a Domino’s franchise. But the reason Doyle considers it an e-commerce site is because half of Domino’s sales are now digital.

Nearly half of Domino’s corporate headquarters work in technology. A full wing of the office is lined with cubicles, white boards, video monitors and signs like this one.

The company hit it big on innovation, albeit a more analog version. Founder Tom Monaghan invented a firm cardboard box that kept pizza hot and prevented squishing in the company’s early days, and years later an employee came up with a combination ladle and spoon called the “spoodle” that Domino’s now uses worldwide.

The ”spoodle” allows pizza cooks to spoon sauce and spread it evenly with the same tool. Every second counts when you have a 30 minutes-or-less guarantee. The company honors the invention with a display case in the lobby at Domino’s HQ.

The speed and convenience Domino’s became known for made the company digital-ready in a lot of ways. Now customers can order pizzas from a smart phone, a smart watch, a smart TV, even a smart car, and all it takes is one tweet, one text, one voice command or even one emoji. It calls the platform “Anyware.”

So is Domino’s a pizza company or a tech company? Well, that’s complicated….

We employ about 700 people here in Ann Arbor [at Domino’s headquarters], and about 300 of them are in technology.

Anyware is the latest phase in Domino’s five-year-in-the-making reinvention plan, one that started the company back at the drawing board in 2010.

The first step in fixing a problem is admitting it exists.

I still remember getting everybody into this room and saying, “Folks, we gotta make a change.” We’ve got to do something different. Let’s start from scratch.

Roxanne Swamba was one of Domino’s corporate chefs responsible creating the company’s new pizza recipe in 2010. It was in this test kitchen at the Ann Arbor headquarters where then-President J. Patrick Doyle told his employees, ”We have a problem.”

The room Doyle is referring to is the Domino’s test kitchen. It was there in 2010 that Domino’s chefs experimented with new ingredients and recipes. After months of testing, the company rolled out a new and improved formula. But instead of simply stamping “new and improved” on the box, Doyle and crew did something rather unorthodox. They told the world their pizza wasn’t very good.

The official title of the ad campaign was “Domino’s Pizza Turnaround,” but the media quickly dubbed it the “Our Pizza Sucks” campaign. In the first commercial, focus group participants called the sauce bland and the crust cardboard-like. The face of the ad campaign was Domino’s then-president J. Patrick Doyle, who apologized to customers and told them he wanted to do better.

To keep turning dough into dough, Domino’s needed a better crust. Here’s where the recipe for ”uncardboard-like” crust was born back in 2010.

This is a company that had built the whole brand around fast and reliable delivery, and Marketing 101 says you focus on your point of differentiation. We kept talking about delivery and 30 minutes or less, and it just stopped working. We realized that everyone in the world who wanted fast convenient pizza was already buying from us, and the people who wanted a great pie simply were not.

It may seem crazy to tell customers your namesake product isn’t up to snuff, especially in the midst of a recession, but the unexpected honesty worked.

Our sales that first quarter we relaunched were up 14.3 percent. We were up 9.9 percent for the year, and I will tell you if I had known we were 9.9 and not 10.0 on December 31, I would’ve bought some pizzas myself.

Keeping up with the Papa Johnses

Reinvention for Domino’s wasn’t just a one-step process. Since unveiling its new pizza recipe, the company has released new sandwiches, pastas, chicken dishes and breads. In 2012 it publicly dropped “Pizza” from its name and re-branded all of its stores.

Doyle says the company is constantly whipping up new products and improving tried-and-true ones in its test kitchen and relies on consumers for final approval. There are 15 booths, each outfitted with a slot for sliding slices to customers and gauging their grins and gags. Domino’s calls it the “sensory panel.”

The ”Sensory Booth” is used to test out new ingredients, pizza combinations and more on consumers at Domino’s HQ.

We do it not only for new products, but we also do it if we’re looking for a new cheese supplier or a new pepperoni supplier, that sort of thing. It has to be an identical match to what we’ve designated the perfect pepperoni.

One of the challenges to creating new menu items at Domino’s is that everything has to be cooked on the same eight-minute conveyor belt oven. Doyle says a lot of the new menu items start at the stores, where customers make requests and franchisee owners fiddle. They then come to corporate for testing.

Largely everything we make goes through the same oven for the same time at the same temperature. It’s a big operating requirement. You look at a lot of different restaurants — McDonald’s for instance has eight or 10 different cooking platforms in each store. We have one. We have an oven. So everything we make, we’ve got to be able to make well through that oven. It makes it a little harder on the front end to get the products right, but that’s also what makes our stores so efficient is we do have fundamentally just one cooking platform in the store.

Domino’s employees sit on this side of the Sensory Booth and gauge consumers’ thoughts on new products.

To keep pace with the surge in fast-casual restaurants, Domino’s is also trying to improve its atmosphere. Though it still has no plans to put seating in any of its franchises, Doyle says he wants the small portion of customers who come into a store to be able to watch their pizza being made. He calls it the “pizza theater” concept.

Cheese ain’t the only thing with culture

Domino’s HQ has a glass-encased mock-up of a Domino’s franchise right in the heart of the building. Doyle says everyone in the company has to learn how to make a pizza, even if they’re destined for a cubicle.

In the heart of Domino’s HQ is a fully functioning store. All employees, regardless of their position, start here making a pizza and running mock daily operations to get a feel for the business.

Domino’s has built a passionate workforce at its mothership and also throughout its worldwide franchises. Doyle boasts that 90 percent of franchisee owners started as employees at Domino’s stores. Perhaps that’s why die-hard employees are sometimes referred to as “Dominoids.” There’s even a companywide cheer.

How do you say “pepperoni” in Swahili?

Domino’s has opened more than 3,000 restaurants in 80 countries since it reinvented its pizza in 2010. There are now more than 5,000 stores in the U.S. and 7,000 overseas. Last year the company made $4.8 billion of its $8.9 billion in sales outside of the U.S., and Doyle says they’re just scratching the surface.

Ninety-five percent of the world’s population lives outside of the U.S. There is lots of room to grow.

A hallway at Domino’s World Resource Center is lined with the flags of the 80 countries in which Domino’s pizza can be ordered.

Doyle says Domino’s has seen success in the U.K., Russia, Brazil and Nigeria, but India has been the company’s runaway hit. “We are quickly approaching 1,000 stores in India,” Doyle said. “That is now by store count our biggest market outside of the U.S.”

But setting up shop overseas comes with challenges. The Asian diet, for example, doesn’t historically include cheese and much of the world is lactose intolerant. Figuring out what’s going to sell in each market requires local input.

We control quality here, but in terms of taste, the new pizza topping that’s going to come out in Mumbai, people in Ann Arbor are going to be fascinated by what they’re doing there, but we’ve got a separate group that works with our master franchisee in India. They have all of their stores in India, they’ve got their own marketing team there, and they come up with the new product launches there. We make sure the quality is right, but they’re the ones coming up with the ideas because they’ve got their fingers on the pulse of the consumer in Mumbai.

Growth in China has been slow for Domino’s so far. Maybe part of the reason is the Peanut Mayonnaise Heart Crust Pizza it offers there.

No such thing as too much pizza

So, Domino’s has 12,000 restaurants worldwide and sells 1 million pies a day. Surely growth is slowing, right? This might be the only time Domino’s openly says, “not so fast….”

Marketplace host Kai Ryssdal with Doyle near the entrance of the tech wing at the Domino’s World Resource Center.