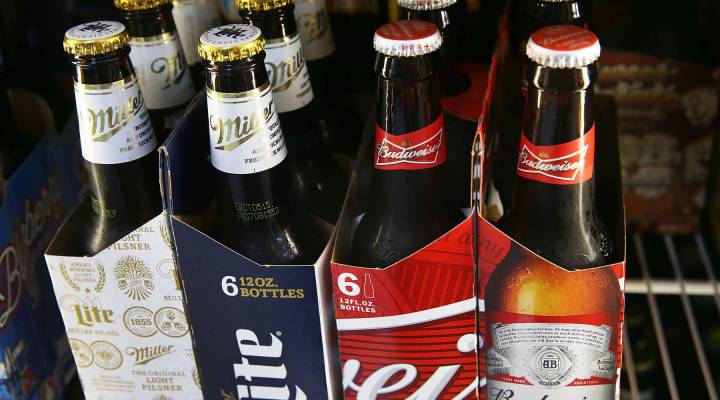 COPY
Bottles of Budweiser and Miller Lite beer are seen on September 16, 2015 in Miami, Florida. Some advertisers worry that with less competition, beer companies will be able to spend less on beer. Joe Raedle/Getty Images

Bottles of Budweiser and Miller Lite beer are seen on September 16, 2015 in Miami, Florida. Some advertisers worry that with less competition, beer companies will be able to spend less on beer. Joe Raedle/Getty Images
Listen Now

Anheuser Busch and SAB Miller currently dominate about 70 percent of the U.S. beer market. And they want to merge. The two companies would almost certainly have to sell off some pieces to cut down to size for regulators’ taste, but the merger would still create one monster-sized company.

Take advertising. The two spend some $50 billion a year on sports sponsorships. In fact, beer is one of the biggest players in sports advertising. That’s why the merger has some advertising agencies worried. Less competition among beer companies means they can advertise less.

“They will have a lot more leverage in the marketplace,” says Chris Pearlman, executive vice president with Van Wagner Sports and Entertainment. “Ultimately [they will] spend less than they would have had they remained separate.”

United, the companies can also negotiate hard on sponsorship deals.

“The teams are going to suffer too, because they’re going to have less leverage to potentially play one beer off another,” Pearlman says.

Others aren’t so worried.

“Individual brands within these companies are treated as individual businesses,” says Tom Haidinger, president of Advantage International. “They all go to market with their own marketing strategies and positioning.”

Then there’s the audience for sporting events: male, aged 18 to 34. They watch their sports live, they don’t DVR games, so they can’t skip commercials, and they drink a lot of beer.
Haidinger is betting that if the big beer companies don’t keep spending to reach them, other beer companies will.

Correction (August 2, 2017): An earlier version of this story incorrectly stated the amount that is spent on sports sponsorship.