The University of Michigan Consumer Sentiment survey declined to a reading of 85.7 in September (preliminary), from a reading of 91.9 in August. The index had dipped modestly earlier in the summer. This was the first reading on consumer sentiment from the University of Michigan to reflect the recent market volatility of late August and early September, as well as the U.S. stock market correction and rising signs of a global economic slowdown led by China.

Consumer sentiment rose strongly over the past year and is now at a level not seen since the mid-2000s, explains economist John Canally at LPL Financial. Chalk this up to U.S. consumers’ actual experience in the real economy.

“You’re going to get some wiggles in the stock market and a lot of people do own stocks,” says Canally. “But really it revolves around things like home values — and home values are up. People don’t have as much debt as they used to, their job is relatively secure.”

And, Canally says, if people have friends or relatives who were unemployed or lost homes in the recession, chances are they’re now doing better financially, which boosts people’s confidence that the economy is truly on the mend.

“People are quite right not to become alarmed and not to do anything hasty with their portfolios,” says Statman. “They cannot influence the global economy.”

Statman says consumers appear to be largely ignoring the most breathless, alarmist media coverage of the U.S. markets, China, and the global economy right now, and instead are sensibly focused on what they can influence — their jobs, spending, and savings — all of which are doing pretty well right now. 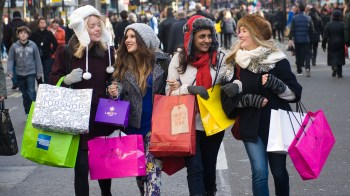 Consumers are feeling good about where the economy’s headed