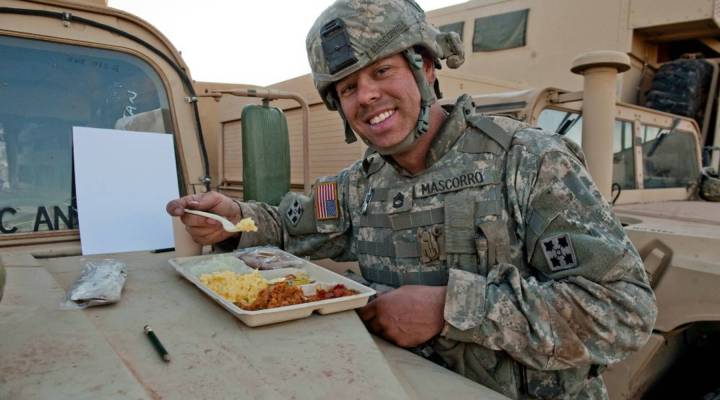 What’s the military doing in our food?

COPY
A meal made by the Department of Defense Combat Feeding Directorate at the Natick Soldier Research, Development and Engineering Center. David Kamm/NSRDEC Photographer/flickr

What’s the military doing in our food?

A meal made by the Department of Defense Combat Feeding Directorate at the Natick Soldier Research, Development and Engineering Center. David Kamm/NSRDEC Photographer/flickr
Listen Now

Anastacia Marx de Salcedo was inspired to write her book, “Combat-Ready Kitchen: How the U.S. Military Shapes the Way You Eat,” by a sandwich.

“I’m a mom and I pack a lot of lunches. And one day I got to thinking about that sandwich and I started to realize the ingredients were actually probably no healthier nor fresher than the packaged ones that pleased my kids,” Marx de Salcedo explains.

Marx de Salcedo decided to investigate how this pre-packaged food she was made. While she investigated she says, “I discovered this obscure U.S. Army base: the Natick Soldier Systems Center. And I said ‘Wow, what’s the army doing in our food?’

This center houses the Combat Feeding Directorate. She took a visit to the directorate, and there she says, “they develop and improve rations, so that means actually coming up with recipes for them, and doing all sorts of tweaks to figure out how to get them to taste right and to have the right shelf-life.”

They even gave her a taste of a sandwich they were working on. “It was … okay,” she says.

She found that, “the reason dates back to World War II and the policy of preparedness that the government put in place afterward so that we’d never have to go through the experience of ramping up for such an enormous multinational conflict again. So it kept the military and the commercial sector that supplies it in a state of readiness.”

To keep this sector ready to produce combat gear, food, and anything else a soldier might need, federal laboratories were established. At these laboratories they conduct research and develop technologies. Then, they pass along this information to the consumer sector.

At the Combat Feeding Directorate, “that means it can look to the food industry to convert its manufacturing lines to producing rations. Or better yet, that some of those consumer items might already meet military specifications which in fact many do.”

That’s right, some of your go-to snacks are already combat-ready. During World War II they made dehydrated cheese to send over to soldiers.

Marx de Salcedo says that, “after the end of the war, a whole little industry had sprung up to support this dehydrated cheese and they needed a market and that market ended up being the grocery manufacturers. One of the very first products to use this cheese powder was the Cheeto.”

It doesn’t end with Cheetos, Natick and the Directorate continue to produce new combat-ready food. The newest product they are working on is the shelf-stable pizza.

“This will be a pizza that is wrapped in regular packaging that you can store in a closet, or in your glove compartment, or on your shelf and just unwrap and eat as is.”