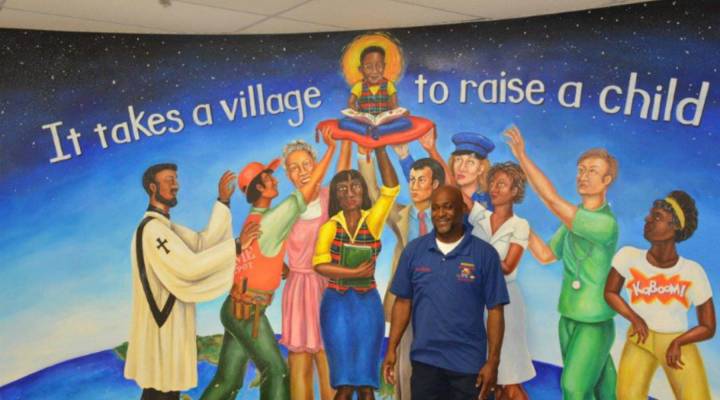 At McMillan’s First Steps preschool, there’s a big mural painted on the cafeteria wall. A smiling boy is held in the air by a doctor, a pastor and a police officer.

Plus, a guy in a Home Depot uniform.

In another city that might seem weird, but not in a city that is rebuilding. Linda McMillan, who owns First Steps, says the flooding that followed Hurricane Katrina destroyed her campus.

“This building had a lot of damage after Katrina,” she says. “We had about maybe 7 1/2 feet of water in this facility.”

So McMillan, who exudes tough energy, parked two commercial trailers on the playground and held classes there. She also saw a growth opportunity. With New Orleans’ education system in disarray, she decided to expand beyond preschool to the 5th grade. For that, she’d need an additional school building and a big loan.

The investment bank partners with local colleges to give small business owners around 100 hours of free college courses. McMillan likens it to business school.

“They gave you accounting, marketing,” she says. “They had different speakers to come out and do the training. I got to know who I was. What kind of business owner I was.”

As it turned out, she was a successful one. When McMillan finished the classes, she was approved for a $586,000 loan. Today, her academy has 115 students.

Her lender is a small credit union that works in low-income areas. The money itself comes from Goldman Sachs.

McMillan got something else out of those classes: an opportunity to network with other small business owners. She met landscapers, master plumbers, signmakers even the owner of a demolition company. When it was time to expand, those were the businesses she called upon.

Katherine Jollon Colsher is the national director of 10,000 Small Businesses. She says she hears stories like McMillan’s surprisingly often.

Goldman Sachs hopes to eventually reach 10,000 business owners. So far, 5,000 have completed the classes and successfully applied for a business loan.

This year, Babson College examined how companies were doing 18 months after their owners finished the program.

Three-quarters of them had increased revenue and more than half had created new jobs.