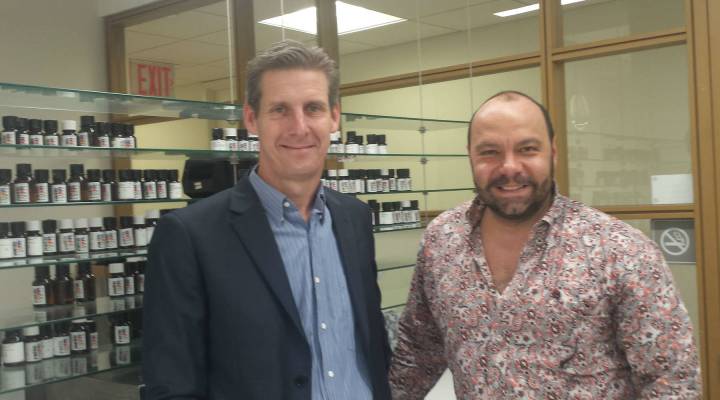 Flores-Roux is a nose ahead in the perfume business

Flores-Roux is a nose ahead in the perfume business

Rodrigo Flores-Roux, head perfumer at Givaudan perfumes, says that “a perfumer’s life is a little bit busy.” That explains why his office is covered in perfume bottles — some professionally packaged, others in clinical bottles titled with a label maker. Magazines, postcards and photos fill up the rest of the space.

It’s all inspiration for when Flores-Roux sits down to create a scent. The first step usually involves a computer and a process that he says resembles creating a recipe.

You think about a certain mixture of things. For example, I am going to do something that has to be very fresh and masculine. So I think about something that is going to be a little bit citrusy, but I want it to have tons of lavender, because lavender is going to be my theme. So you choose one or two, you mix them in different amounts, etc., in order to create something that will be pleasing, will have signature, memorability and hopefully not only make millions of dollars, but it will also become signature and innovative.

The “recipe” is sent to a lab around the corner from Flores-Roux’s office. It’s “literally where the magic happens” he says.

The lab is filled with technicians — junior perfumers — in white lab coats, working with bottles that are neatly stacked on shelves at each work station. The air is heavily perfumed. Flores-Roux stresses a good perfume isn’t made up entirely of “good” smells.

“You can use horrifically stinky scents, but in the right amount, they add something.”

Outside of the lab, the business of perfume is cutthroat.

“We are sharks.” Flores-Roux says. “We are Godzillas, and we want to crush the competition, and actually sometimes we get crushed,” he says.

Much of the work a perfumer does is on spec — a company decides to create a signature scent, and they approach several perfume houses like Givaudan at once.

“We are briefed at the same time in a competitive way,” says Flores-Roux. All the candidates create a scent they hope will be chosen by the client. But “only one wins. I do have to say, it’s very, very sad, because you put your life there, and then you’re not chosen. And guess what? You do not get paid. It’s a business model that is very strange and a little sadomasochistic, but that’s the way it is.”

Flores-Roux says he doesn’t wear perfume at work — no one does at Givaudan — but when he goes out, he’ll “empty the bottle.” Spritzing a perfume cloud and walking through it? He does not approve.

For Kai, Flores-Roux recommends a scent he created for John Varvatos called “Artisan.” Get a virtual whiff with some of the Marketplace staff below.