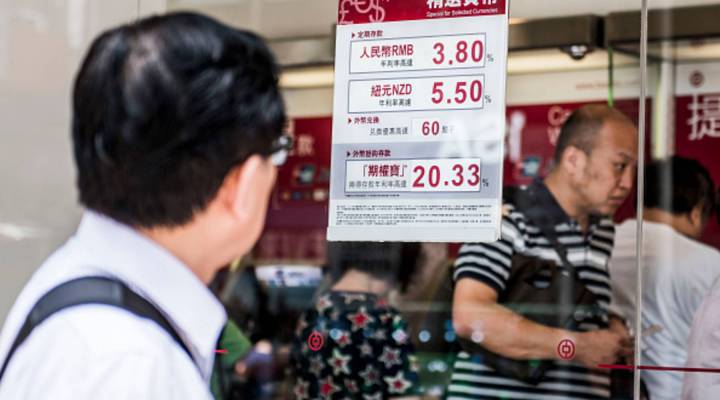 COPY
A man walks by an advertisement for renminbi and New Zealand dollar deposits at a Bank of China in Hong Kong on Tuesday. Bloomberg / Contributor

A man walks by an advertisement for renminbi and New Zealand dollar deposits at a Bank of China in Hong Kong on Tuesday. Bloomberg / Contributor
Listen Now

China’s central bank has stepped in after the Shanghai Composite Index sank more than 7 percent for a second day. The bank has cut interest rates for the fifth time since last November and lowered the amount of cash banks must set aside to help its slowing economy. We consult Rob Schmitz, Marketplace’s China correspondent in Shanghai, on whether this is the right move to save China’s stock market rout.

“I think it would’ve worked a heck of a lot better had the central bank done this three days ago, so they could’ve avoided a global ripple effect,” Schmitz says. “It would’ve saved everyone billions of dollars.”

While lowering interest rates may offer a short-term boost to the global economy, as Wall Street is likely to respond positively, in the long run, Schimtz doesn’t think this is the answer to China’s economy.

“This is the fifth time since November that China’s central bank has cut this lending rate. If it had worked the first time, they wouldn’t have had to keep doing it,” Schmitz adds.

If China keeps cutting interest rates, its currency, the renminbi, will become cheaper — which might create a problem for U.S.-China trade relations.