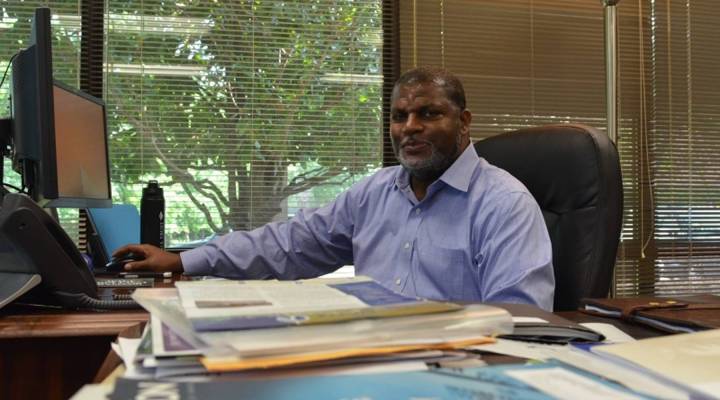 COPY
Bill Bynum, the CEO of Hope Credit Union, at his office in Jackson, Mississippi. Caitlin Esch/Marketplace
10 years after Katrina

Bill Bynum, the CEO of Hope Credit Union, has a couple of striking pictures hung on the walls of his Jackson, Mississippi, office.

There are two of him with U.S. presidents: Barack Obama and Bill Clinton. He advised them (and George W. Bush) on community development. Bynum also has a photo of a small, blue, ramshackle house that he spotted while driving through the Mississippi Delta one day. The house’s tin roof is rusted and the front porch is collapsing. Bynum says it looks like it should be bulldozed. But it’s someone’s home. He says the picture serves to remind him of the credit union’s mission: to invest and lend in high-poverty, low-income communities, the types of places often neglected by big banks.

Bynum’s photo of the ramshackle house.

“It is frustrating to drive through the Delta and through low-income communities and see street corner after street corner, shopping strip after shopping strip littered with payday lenders, with check cashers with financial predators, but no bank to be found,” Bynum says.

This was the problem Bynum wanted to address when he started Hope Credit Union in a small room at his church in Jackson 20 years ago. The first members were his fellow parishioners. Today, Hope has 31,000 members and nearly $300 million in assets. It has expanded throughout the South, focusing on communities that have few or no banks.

Bynum and Hope were invited by a church in New Orleans to open a branch in that city’s Central City neighborhood. It opened in December, 2004. At the time, there hadn’t been a bank in Central City for 4o years.

Saundra Reed, who says six generations of her family have lived in Central City, is one of a group of residents who pushed Hope to open in Central City. Reed has a soft voice that occasionally rises in animated imitations. She says the absence of a bank was holding Central City residents back. In wealthier New Orleans neighborhoods, Reed says, people have relationships with their banks.

“They can walk into a bank and say, ‘Hey, how you doin’ Cyrus?’ And Cyrus says, ‘I’m doing good Mr. Joe. I need to talk to you a little bit about some money.’ And before it’s over, it’s a handshake and a cigar, and they’re out the door,” Reed says. “What Hope offered us was the opportunity to have that kind of personalized relationship.”

After Hurricane Katrina in 2005, Reed took out a second mortgage on her home with Hope. When she walks in to pay her bill, the man at the counter knows her instantly.

Hope opened in New Orleans eight months before Hurricane Katrina hit the region. The New Orleans branch escaped damage, both from flooding and from looters. And in part, because of its luck, the credit union’s performance in the months after the storm is not without critics. The branch manager at the time, Lynnette White-Colin, says Hope did a great job of granting “recovery” loans to people who needed small amounts of money for basic necessities. But she says Hope was too slow and too conservative at granting larger, but equally necessary, loans. At times, White-Colin says, she’d have 30 or 40 home loan applications piled up on her desk.

“I have to see these people every day,” White-Colin says of her experience with customers after the storm. “I go in the supermarket and I see them. I go to the mall; I go to church, I see them. They entrusted me to take a loan application, and it is taken six months and they still don’t have an answer. And these are people who are very creditworthy.” White-Colin left the credit union in 2007.

Bynum says the response to the storm was bound to be unsatisfying to many people.

“The level of destruction, the amount of displacement, the documents that had been washed away and torn up after the storm really made it difficult to get your arms around a lot of things that traditionally a financial institution can use to understand how to make decisions and make sure that not only is it meeting the regulatory requirements, but that we’re using our depositors resources in a way that’s going to be prudent,” Bynum says.

The chaos and the sheer level of need, Bynum says, prompted the credit union to grow, expanding from 55 employees to 150 in the year and a half after the storm. That meant there were people in place when the rest of the country was hit by a different kind disaster three years after Hurricane Katrina: the financial crisis.

“All of a sudden, you had communities that were losing banks in record numbers; people couldn’t get access to basic banking services,” Bynum says. “We decided we would use the infrastructure and capacity we had put in place to address the spread of bank desserts across the South.”

Bynum likes to cite a Bloomberg report from 2013, that found that, since the recession, 1,800 U.S. bank branches have closed. Ninety-three percent of them were in low-income communities.

In that same time, Hope Credit Union has tripled in size, expanding from seven branches to 24.