Watching Facebook’s hourlong presentation on unconscious bias, it’s pretty clear that the company execs believe the best solution is asking employees to monitor their own prejudices and to take responsibility for keeping them in check.

The release of Facebook’s videos is part of a public reckoning and an attempt to show that steps are being taken to improve some of the statistics.

Says Sandberg, “Many people have asked if we’d be willing to share our training outside of Facebook, so today we’re making the presentation part of the course available to anyone.” But as the Wall Street Journal points out, given Facebook’s own challenges with diversity, the company is perhaps not in the best situation to lead by example.

A recent report showed that more than half of the social media network’s staff is white. And as the Guardian writes, of the 1,231 new hires made in 2013, only seven were black. Gender bias also remains an issue — the percentage of male employees actually increased by 1 percent to 68 percent.

It’s part of a larger conversation the tech industry is having about bias in the workplace — a topic that came to a head at this year’s SXSW when Google CEO Eric Schmidt was called out during the audience Q & A for interrupting Megan Smith during their panel on innovation — the audience member who pointed out Schmidt’s unconscious bias was, in fact, Judith Williams, Google’s global diversity and talent programs manager.

In one of the training videos, Facebook’s own global director of diversity, Maxine Williams, talks about how a fear of prejudice can result in self-censorship, citing the example of Latina women being stereotyped as hot-headed: “When Sheryl Sandberg teaches this course, she talks about the fact that she cries at work. And she admits that. But she says, ‘You know, if I were Latina, I might not be so prepared to admit that because it’d be playing into the stereotype.’”

Other activities include asking audience members to identify who they would most likely hire based on five short video clips of various people introducing themselves, as well as inviting employee input on how certain biases can be combated in the workplace. Many of the suggestions are on a small scale — divide basic office work duties like note-taking during meetings between men and women, for example.

In her note, Sandberg briefly says that Facebook has a long way to go in terms of diversity, but she concludes, “by helping people recognize and correct for bias, we can take a step towards equality – at work, at home and in everyday life.” 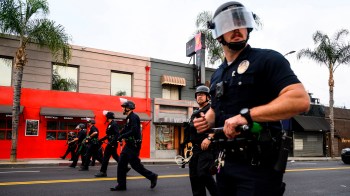