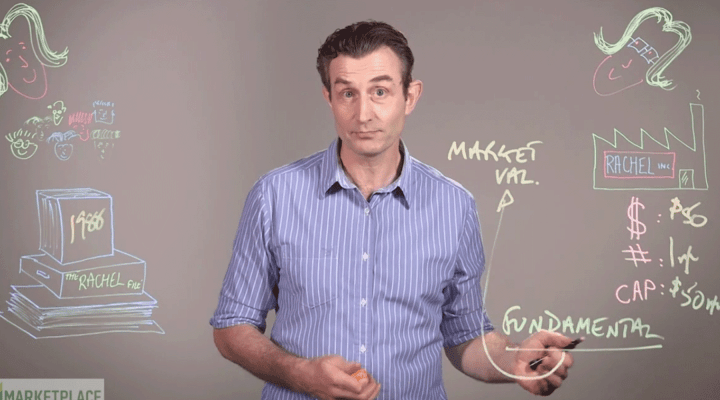 Valuation is a sticky subject: what is a company worth? Apple was worth $766 billion at the start of the week. This morning it was worth $50 billion less. Yesterday, Facebook was worth less than General Electric: today it’s worth $2 billion more.

How can this be? How can a company’s value change so quickly in such a short time? The answer is, it depends on what you mean by “value.” There are a couple of ways of determining a company’s valuation, as this short video neatly explains. There’s the easy, shortcut way, which is to ask what everyone else thinks – it’s right there in the stock price. Multiply that number by the number of shares that the company has outstanding, and you get something called the market valuation, or the market capitalization.

But there are a couple of problems with this approach. First off, only asking people what they think something is worth is a flawed strategy … because people are often just plain wrong. Second, when people buy shares in a company, they’re making a bet, hoping that the share price will rise. Which means a lot of people in the market aren’t focused on the company’s worth, they’re really just interested in its price, which is an important distinction.

It’s that focus on worth that defines the second way of determining a company’s value. It’s called a fundamental valuation, and it requires a lot more than just looking at a stock price. Analysts doing a fundamental valuation do what’s called due diligence: they comb through the company’s books, see what it earns and how it earns it, how much debt it has and what the competition is like. It’s an exhaustive, time-consuming and expensive process, but investors fail to do it at their peril.

The fundamental valuation does indeed drive the market valuation to some extent: a lot of the people buying shares have done the hard work to assess a company’s worth. But a lot have not. A lot are lazy so-and-sos who buy when something’s rising and sell when it’s falling. That so-called momentum trading, can skew the price of a stock dramatically, pushing it way higher than it should be, and turning trading in the stock market into a much riskier business than it should be. Because it you buy at a point higher than the fundamentals of the company justify, and the market corrects, you could be left badly needing a drink.