Housing starts rose 9.8 percent in June, the U.S. Commerce Department reported Friday. Yet behind that big monthly number is some economic noise. Almost all the building increase came in apartments and condos, which creates fewer jobs than the single-family house market and can be a volatile statistic month to month.

Still, economist Stephanie Karol of IHS Global Insight notes a broader set of numbers that reflect what she calls a housing recovery gaining steam: building permits are at their highest in eight years; single-family housing starts, on an annualized basis, were up 43 percent in the second quarter; and first-time home buyer purchases rose nearly 30 percent over last year.

“That’s new blood entering the marketplace,” Karol says. “That frees up some of the older buyers to then turn around and say ‘Hey, I want a new house. I want to build the house that I’ve always wanted.’ “

Analyst Daniel Hyman at Pimco notes the housing market is fueled by an improving labor market. He says the economy has created 10 million jobs in the last five years, and the jobless rate has dropped more than four percentage points.

“People have jobs, a little more money in their pocket,” Hyman says. “They form households.”

Banks may hold a key to the next level of recovery, says Morgan Stanley managing director Vishwanath Tirupattur. He says mortgages are affordable, they just aren’t available to enough people.

“While we are getting better, better than last year,” Tirupattur says, “we are quite far from what would I consider to be a more normalized housing market.” 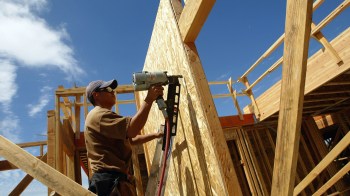