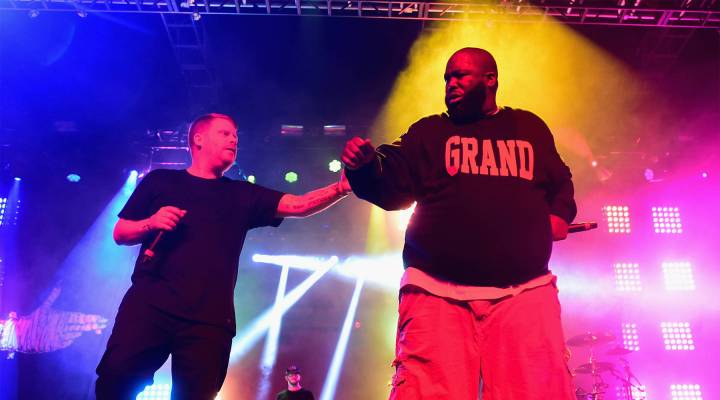 Run the Jewels on the confederate flag, money and teens

Run the Jewels on the confederate flag, money and teens

Marketplace’s Lizzie O’Leary interviewed Run the Jewels this week, a hip-hop duo formed by New York City-based rapper/music producer El-P and Atlanta-based rapper Killer Mike in 2013. Killer Mike and El-P are willing to talk about the ways they wasted money in their respective youths (drugs, strippers, generally being young and dumb). They also open up about how their relationship with success – both monetary and artistic – has changed as they’ve reached 40.

El-P on how he thinks about money:

So I think of money in the same way that everyone thinks of money. I like to be as free as possible in this world, and if the game is that you have to collect a bunch of green pieces of paper in order to be able to be autonomous and not have to deal with people you don’t want to deal with, I’m going to go get that. I’m not going to change myself or the thing I love or the thing that has been there for my whole life, which is the love of music. I’m not going to change what that is and what the intention is. So, I’ve always had the perspective that you want to try and bring money to the thing that you love and not try and take the thing that you love and change it so that it fits with what makes money. I love making money, but I just think at this point, both Mike and I agree that we’re not going to do it unless we feel right about it, or unless the surrounding circumstances are that we’re happy.

Money is a tool to be used, and it’s used to take care of my wife and children. It’s used to invest in my retirement, it’s used for me to open and run business, and I’ve learned the art of money. Now, I’m happier with security, knowing that I have a good savings now, knowing that my wife and I are making intelligent decisions with our money. But I was already happy, and I’ve better learned to use the tool that is money now, to keep me free of business deals that I don’t want to be in, to keep me free from the stress and strain of bill pay and to provide a better life for my children and my wife.

Killer Mike and El-P on growing up in the music business:

Mike: When you’re 20 years old, you waste it on what all 20, everything you think you want, everything, stuff you order online. I’m from Atlanta, the capital of strip clubs, so I put a considerable amount of women through college, I’m sure.

El-P: An apartment that’s too expensive, you know.

Mike: Yeah, cars that aren’t worth the next year what you paid for it, you know, just all the stupid stuff. You know, when you grow up working class or poor, you have a fantasy of buying stuff, and when you first get money you indulge that fantasy and you can overindulge.

Killer Mike on the Confederate flag:

Socially I think, I think the flag coming down is a good thing. Not that I have a problem with the flag for people who see it as a part of their heritage. Their family members might have served in the Confederacy, and they care to hang it on their living room walls or outside their porch, that’s fine with me. I don’t think that the flag of any loser nation should hang above the nation of winners. The Union won, America did not allow the secession. We became the country we’re supposed to become, and the Confederacy failed. And based on that failure, that flag should never hang over a government building or municipality again, because it represents a time when a civil war happened, and people wanted to secede from the Union, and it didn’t work. It’s that simple for me, you know. You can’t, you can’t, you know, LeBron and the Cleveland Cavaliers can’t wear a world champions T-shirt this summer, it just can’t happen, because they lost.

The Confederate battle flag that people are used to seeing in places like Mississippi, South Carolina, that’s a, that’s a much worse offense to me because that flag in particular was the flag that says the Confederacy has not died. We’ve put on sheets, we ride at night, we put on black sheets, in the day we call ourselves judges, police officers. That says the spirit of secession lives, and that’s just simply not true, because you lost, and um, that’s the way it is. A lot of those flags went up in the turbulent ’60s — when protest was about to give people their civil liberties, people that look like me — as a last ditch effort, you know, you know, just to be pugnacious and just to be ornery and mean, a lot of those flags went up.

El-P and Killer Mike on friendship and race:

El-P: I think that for us, our friendship is so easy that there’s, and rooted in so many things, so many aspects of our personality and our history and things that we love and things, conversations we have. But it does come up, and it’s important to come up because in a lot of ways, in, we’re very aware that even us having a public friendship and even us having the chemistry and making music that works is a powerful thing to some degree for people to see, especially in times of confusion and strain. You can’t really explain friendship away, and I think that’s one of the most important things. You can’t really explain love away, so when that is standing there amidst all of the sort of confusion and turmoil and bickering, and you know, regression, we are very aware that that’s a powerful thing. And we have a rhythm and we have a respect for each other in the way that we deal with it, I think. I think that, a lot of times, it’s my job to shut up because there are … very, very serious issues that are brought up that are directly related to Mike being a black man in America, that I can be in solidarity with, my brother and my friend, and support him the way that I think that any one human should support another human. But I’m old enough and wise enough to know when it’s not my place to really go in and talk because I don’t have the legitimate practical experience of being black in America. I think that comes out of us being 40 years old and being smart guys and being around, and having experience and having sensitivity to each other and understanding that. And there are other times when it really makes sense for us to talk, both of us to talk, because we’re talking about an issue that wouldn’t exist without the other guy’s race.

Mike: I think everyone should have a friend of a different class, culture or race. I think that would do a lot more to stop systemic racism and a perception of than anything else. I don’t … think you can view people like, oh, they’re cool, as groups of people, and don’t bother them. But if you don’t have a Muslim friend, you’re not as progressive as you think. If you’re black and you don’t have a white friend, if you’re white you don’t have a black friend, an Asian friend —

El-P: — If you’re straight and you don’t have a gay friend —

Mike: If you don’t have someone from outside of your social circle of comfort, than you could be doing more. And it’s just that simple.

Killer Mike on advice to his teenage daughter:

Well yeah, we were at daddy-daughter dinner yesterday before I left. We talked about nose rings, tattoos, marijuana and college. And ‘Mom won’t let me get a nose ring yet.’ ‘Why?’ ‘Because she says I’m too young.’ ‘I’m prone to agree with that. You need something to look forward to.’ ‘My friend went and got a tattoo.’ ‘Really, what’d Dad tell you?’ ‘You told me if I ever want a tattoo, to come to you, it’s going to be ugly like my older brother did when he snuck off and got one.’ ‘Good. Marijuana, I’m sure you’ve smoked, so I’m not going to ask you, so you don’t have to lie to me, but do you know the rules of smoking? Don’t give smoke, you know, anything anybody’s pre-rolled for you. If you’re in the company of boys, let me let you read this article on Mr. Bill Cosby. And we’re not going to be just randomly smoking.’ And she got it, and then we spent the rest of our time after that 10 minutes talking about colleges, and you know, she wants to teach, and which colleges are going to be best for her. But, I just more than anything try to keep the lines of communication open. She’s fearless and that she she isn’t so afraid of her father that she’s not willing to be honest with me, so that was important. I have two daughters, a 17-year-old and an eight-year-old, and both are pretty feisty young women, and they let me know their minds.