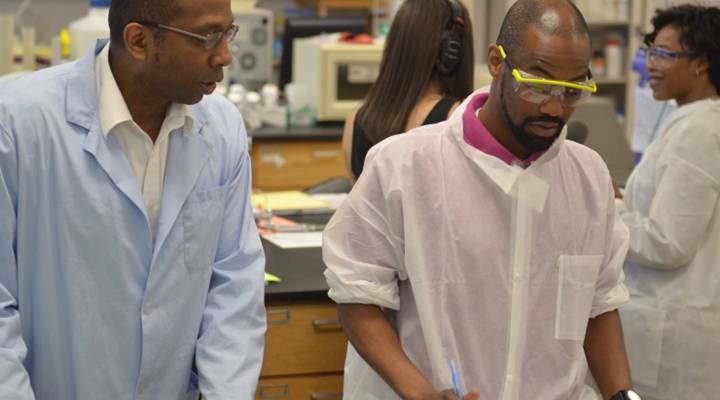 Jamond Turner used to work as a security guard at Johns Hopkins University, where one evening, his rounds took him past a laboratory. Turner was impressed by what he saw and decided to pursue a career in laboratory work.

The decision brought him to the BioTechnical Institute of  Maryland, a nonprofit that trains unemployed and underemployed Baltimore residents tuition-free for entry-level, high-skill jobs in labs.

BTI’s Lab Associates program has its genesis in Baltimore’s Empowerment Zones. Baltimore was one of six U.S. cities that won the federal Empowerment Zone designation in 1994. The city was awarded $100 million dollars and a host of tax breaks for business and employers. Baltimore sunk the money into job creation and job training. And while many of the jobs have since disappeared, job training programs saw some successes.

The BTI program began in 1998, partnering with a laboratory company that received tax breaks for moving into one of the city’s poorest areas.

Since then, about 350 students have graduated and gone to work for employers that include cutting-edge biotech firms, the American Red Cross and the McCormick spice company.

Kathleen Weiss, the executive director at BTI, says people often hear the term “entry-level jobs” and think of retail positions or warehouse work. She says students at BTI are preparing for entry-level jobs with a future. The average starting salary for a BTI graduate is about $27,000 a year and includes benefits.