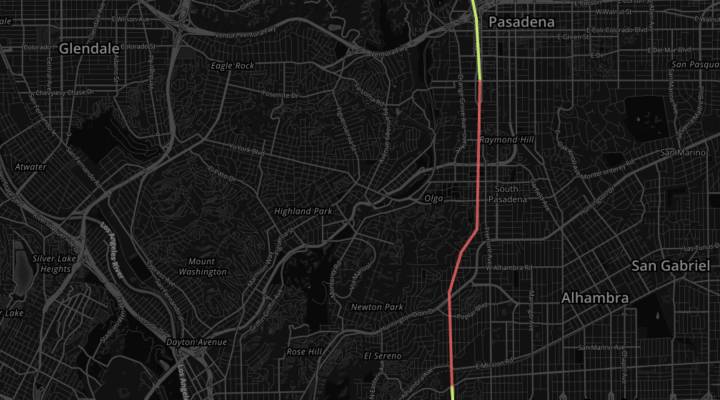 The Weak Link: The state of infrastructure

COPY
The gap between the 710 and 210 freeways near Los Angeles. Tony Wagner/Marketplace
The Weak Link: The state of infrastructure

The gap between the 710 and 210 freeways near Los Angeles. Tony Wagner/Marketplace
Listen Now

We’re doing a series this week about the perilous state of the infrastructure in this country. The power grid, water supply, roads — all stuff an economy pretty much has to have to function. However, all that stuff in this country keeps breaking or doesn’t get built.

One example of this is right near Marketplace headquarters in Los Angeles. A 4 1/2-mile stretch of infrastructure that, so far, has not been built and has had people fighting over it for about 59 years.

It’s dubbed the 710 Gap – just northeast of Downtown Los Angeles between Pasadena and the city of Alhambra – where two interstates, the 210 and the 710, were at some point supposed to connect. Instead, both highways just end – four and a half miles apart.

Highways are built in segments, as the 710 once was from the port of Long Beach north to Alhambra.

But when time came to build the 4 1/2 miles from Alhambra to Pasadena back in the 1990s, locals objected, sued and got an injunction.

Since then, thousands of cars dump out onto surface streets in the surrounding towns daily, causing major traffic, environmental issues and health problems. (Full disclosure: if the 710 Gap is ever closed, it’s going to mean those thousands of cars are going to pass real close to my house.)

Anthony Portantino, a former state assemblyman for the district where the 710 Gap is, has been “an opponent of this project for well over a decade.”

“The best way to move people through the region is through a multimodal approach: light rail, bus systems, traffic circulation,” Portantino says. “Let’s do all of it, not just build a $10 billion hole in the ground that’s going to make all of it worse.”

That “hole in the ground” is a tunnel that would connect the 710 and 210 highways. It’s one of the options that CalTrans, the state transportation agency, and the Los Angeles County Metropolitan Transit Authority have offered the community as a solution to the region’s congestion problem.

All of the other options would leave the gap open but tackle traffic with light rail, bus lines or fixes to existing roads. There also is an option to do nothing and leave it as is.

A draft proposal on those five alternatives is out for public comment now.

“It’s a project that’s been studied and studied and studied, and that gap in 710 from Alhambra up through South Pasadena has been a real ole’ struggle,” says Bob Stevens, president of the American Society of Civil Engineers. “It may be a record on how long it’s taken to go from building the road from both ends and having that gap that they can’t get completed.”

Will I-710 ever be finished? A 4.5-mile gap dumps more than 43,000 vehicles onto the streets of Alhambra, California, every day. Neighboring South Pasadena opposes a plan, which includes a 4.9-mile tunnel, to close the gap. It doesn’t want the freeway’s noise and air pollution. Kai Ryssdal reports on the passion surrounding a highway that doesn’t exist.

The Weak Link: The state of infrastructureVideo
Tags in this Story
Share this Story