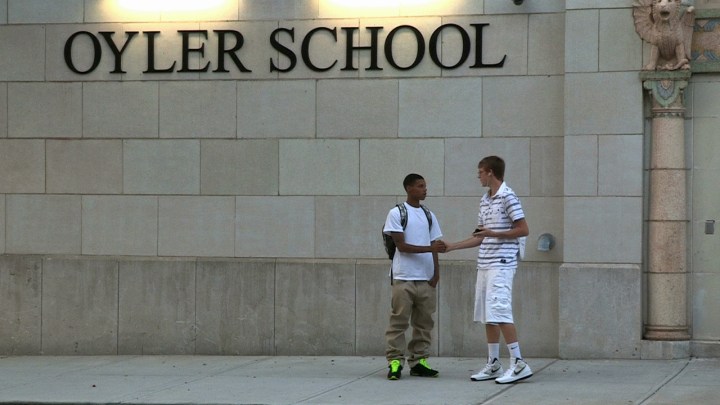 College is only one option after Oyler School

COPY
Students in front of Oyler School in Cincinnati. Glenn Hartong
One School, One Year

College is only one option after Oyler School

At a recent college fair at Oyler School in Cincinnati, Ohio, students from the 7th through 12th grades file through the gym. A few students cluster around representatives from a local community college and liberal arts school, but it’s the table for the Paul Mitchell cosmetology school that’s mobbed.

It may be the free samples and coupons for haircuts, but this year Oyler is making a bigger effort to promote trade schools. When Paul Mitchell admissions leader Christina Matthews was in high school, she says, college was the obvious next step.

At Oyler, college has never been taken for granted. It’s only been a high school for nine years. Many of its mostly low-income students will be the first in their families to finish high school, let alone consider a four-year degree. Oyler has been working hard to build a college-going culture. College graduates tend to make more money during their careers, and economists say more and more jobs of the future will require degrees.

“It’s not so much about, ‘You have to get a four-year degree,'” she says. “We’re trying to make it, ‘What is going to make you happy, and what kind of education does that require?'”

Sometimes, a short-term certificate can go a long way. Last summer, one Oyler graduate spent just five weeks training to be a nursing and patient care assistant. Instead of making $8 an hour in an entry-level restaurant job, Thomas says she got hired at a nursing home making $13 an hour with benefits.

That student has a child of her own, so like many at Oyler, she needed to start working right away. Others, like current senior 18-year-old Nathan Meyer, just aren’t that into school.

“I don’t want to spend all my money to go somewhere that I don’t feel comfortable,” Meyer says. “I feel like there’s plenty of other things you can do to make money.”

At the end of the fair, Meyer and his fellow students gather on the roof to release balloons representing their career goals. He’s thinking about joining the Navy, or maybe training to be an electrician, but most importantly, he wants a steady job.

Of the 45 graduates from Oyler this year, more than half plan to attend a two-year or four-year college. About 38 percent are undecided, or plan to go straight into the workforce. Seven percent are headed to trade school.