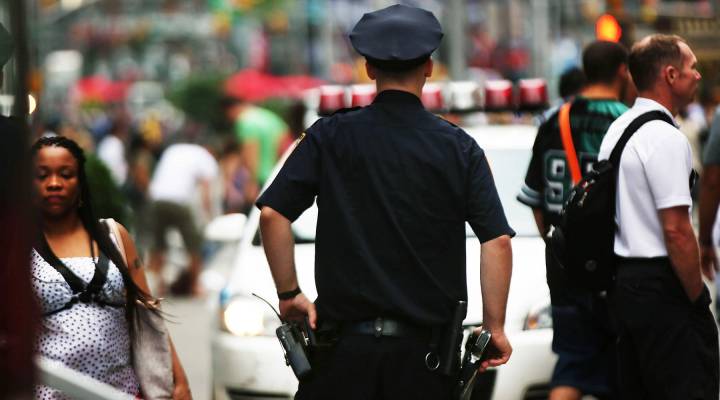 One solution that’s proposed by civil rights advocates to deal with problems of racial profiling and excessive use of force on minority suspects is to increase police ­force diversity. The idea is that if officers on the beat more closely resemble people on the street, then this will reduce police-community conflict. This is especially relevant in big cities such as Los Angeles, Dallas, Chicago and Oakland, and smaller cities such as Ferguson, Missouri, where the population is now majority black and Hispanic but the police force is still majority-white.

But it is not clear — based on anecdotal evidence from police forces around the country and academic research on policing — whether having more officers of color would actually help protect people of color from racially biased treatment by police.

At a law enforcement expo near Portland, Oregon, recently, vendors were demonstrating police­-training video simulators. The company VirTra, from Tempe, Arizona, offers its V-300 simulator for police and military use-of-force training. It features a 300-degree video-screen array. Armed with laser-equipped Glock service revolvers, the participating police trainees stand on a raised platform and are faced with an evolving scenario to which they decide how to respond in real time. Possible scenarios range from a drunk driver who refuses to pull over to active shooters in a school.

Veteran instructor Scott Dilullo of VirTra runs the use-of-force simulations. He says in one scenario an active shooter is in a movie theatre. The cops being trained virtually enter a lobby, where a side door then opens. Dilullo describes what happens next: “We have a black male off­-duty officer come out with a badge in his hand and a gun. We have officers [in the training] shooting him even though he’s screaming ‘I’m a cop, I’m a cop, I’m a cop.’ They’re not seeing the color of his skin; that’s not coming into play. What it is, is that they see the gun, and they’re reacting to it.”

However, academic research on this shows many police do react to the race of the person they confront. Joshua Correll is a psychologist and neuroscientist at the University of Colorado. In his experiments, Correll puts subjects, including police officers, in front of a screen, and a character pops up, black, or white, holding a gun or holding a non-threatening object such as a can of Coke or a cellphone.

Correll says police in general react correctly to the threat they face, assuming they are properly trained. “Police officers are pretty good at making the right decision, shooting the guy with the gun and not shooting the guy with the cellphone, and race doesn’t dramatically impact their decisions,” says Correll. “They’re not more likely to shoot a black target than to shoot a white target.”

But Correll has also found a difference in police-reaction that is based on race. “When we look at their response times, we do see a pattern of racial bias in police officers. Such that, if it’s a black guy with a gun, they respond really quickly, and if it’s a white guy with a gun, they make the right decision, they shoot him, but it takes them a second. It’s like, they have to override active stereotypes to make the right response.”

Correll says this result mirrors other psychological research on racial bias and stereotyping, which he says are communicated in movies, music, news reports and other media. “When a black target pops up on a screen, participants show this kind of enhanced attention, similar to what people show when they respond to a threat,” Correll says. “It may not be conscious, it may not be intentional, it may not be something that they are personally comfortable with. But in our society, they pick up on the association between race and threat.”

And Correll says the response is essentially the same regardless of the race of the subject being tested. “We’ve looked at undergraduates, people in the community, people in law enforcement,” says Correll. “If the participant is black rather than white, are they less likely to associate a black target with danger? The answer is generally no.”

Professor Delores Jones-Brown studies race and policing at John Jay College of Criminal Justice in New York, and based on the academic literature, she believes that “diversifying the identity of the people on the police department is not a panacea to police brutality, misconduct or poor police-community relations.”

Jones-Brown continues: “There is a bit of naivete that if you have an officer of color, that officer can’t engage in racial profiling. And I think all the evidence suggests that’s not the case. We do see black civilians, particularly black men, as potentially more dangerous, potentially more criminal, than others. Even black and other minority police officers engage in that stereotype as well. One explanation is that they may be attempting to prove themselves as worthy of the police culture or demonstrate to their white counterparts that they’re not being more lenient on their own ethnic group.”

NYPD Patrolman Sean Forbes sees this in his daily work. He works in multiple precincts in Brooklyn and often responds with his duty officer to crime scenes where suspects, witnesses and other civilians allege police mistreatment or misconduct based on race.

Forbes is black and says he sometimes sees other minority cops treating people of color more harshly than white cops do.

“The reality is, some of the guys that I deal with are worse” than white cops, says Forbes. “I’ve seen officers of color—black and Hispanic—who basically fit into the ‘I’ve got to prove myself, I’ve got to make these guys realize I’m in charge’ kind of attitude.”

Forbes says he does feel more comfortable responding to a disturbance or crime when there are other officers of color on the scene. And he believes recruiting more police of color in New York and other cities would help build trust and acceptance for law enforcement in minority communities.

Still, attracting more black and Hispanic recruits continues to be an elusive goal. According to data from the U.S. Bureau of Justice Statistics, as of 2013, the percentage of black police officers nationwide was 12 percent and had not risen since 1997. Blacks make up 13.2 percent of U.S. population, according to the most recent census data. From 2007 to 2013, the percentage of Hispanic police increased from 10.3 percent to 11.6 percent. Hispanics make up 17.1 percent of U.S. population.