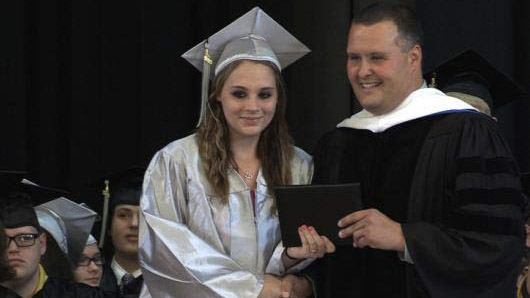 When I first met Raven Gribbins almost three years ago, she was 17, a senior at Oyler School, in Cincinnati, Ohio. Her light brown hair was slicked back in a ponytail after volleyball practice. Raven grew up in Lower Price Hill, one of Cincinnati’s poorest neighborhoods. No one in her family had ever finished high school.

“Everybody used to tell me all the time, ‘You’re not going to make it through high school,'” she said then. “You’re going to have a baby by 16. So I’m glad to prove all them wrong.”

Now, Raven is sophomore at Penn State State Greater Allegheny, a small campus outside Pittsburgh. Her long hair is dyed black, to match her name. And her old teenage defiance now sounds a bit more like confidence.

“Since I’ve been here, I done grew up a lot more,” she says. “To be in the first in my family to go to college, and to make it here and still be here, it’s a good feeling.”

Raven almost didn’t make it. When she started college last year, she acted like a lot of students away from home for the first time.

“I was trying to live the college life like you see on TV and movies and stuff,” she says. “You get to turn up and drink and have fun and don’t worry about school work.”

She ended up failing several classes. As a result, she lost her financial aid for this year, and had to borrow more than $18,000 to stay in school. Her bad grades also got her tossed from the volleyball team. Volleyball was the reason she’d been recruited to Penn State.

“It broke my heart going to the games,” she says. “I was like, ‘I can’t do it no more, I’ve got to get my stuff together. I’ve got to get these grades up so I can play.'”

So she’s been getting help, from people like April Belback, who runs a program on campus called ACE, the Center for Academic and Career Excellence. It’s a federally funded support program for low-income and first-generation college students. The push to enroll more low-income students in college has left schools grappling with how to help them succeed. Those students are much more likely to drop out than students from more affluent backgrounds.

Raven comes to the center for tutoring, workshops and advice about classes. On a recent day, she and Belback go over a presentation Raven will give later in her criminal justice class.

“Do you want to practice?” Belback asks.

“Do you have a PowerPoint?”

Belback keeps pressing until Raven fishes a paper out of her bag for Belback to read.

This is known as intrusive advising. It’s a strategy to keep at-risk students on track. Belback says last year she needed to intrude a lot more. She went to Raven’s classes to make sure she showed up, and even woke her up for class on occasion.

“She just doesn’t need me to do that anymore, which is kind of cool,” Belback says. “The second year, I just feel like she’s coming into her own.”

Raven wanted to be a math teacher, but struggled with college-level math. So she also switched her major this year, from Education to Criminal Justice. And she’s brought her grades up enough to get her aid back, and play volleyball again next fall.

But Raven’s second year hasn’t been easy either. Her dad, who had been clean for almost seven years, started using heroin for a while. Raven blamed herself for not being around. Her grandfather, who pretty much raised her, got really sick.

“A lot of times I was ready to just transfer and be back home with my family,” Raven says. Her grandfather told her she was better off staying in school.

“I’m going to do it for him,” she says. “To prove to him that he raised a great granddaughter and I’m going to make something out of my life. To show him that we can do it.”

There is a lot of pressure on Raven. For one, Marketplace has been reporting on the progress of Raven, and her old school Oyler, since 2012. A mentor who heard one of those stories paid for half of Raven’s tuition. Raven is also well aware a close cousin who finished high school the same year she did dropped out of college after one semester.

“It makes me feel like I can’t fail,” she says. “If I fail, then I’m letting my whole family and everybody else down.”

That evening, Raven gives her presentation about domestic violence in front of her criminal justice class. She’s nervous, but she nails it. Afterward, we go out for milkshakes, and a guy who’s visiting from Cincinnati — just a friend, she says — comes along.

On the ride back to campus, Raven fiddles with the radio, and then chats with another guy on the phone. Guy number one sits in the backseat, becoming increasingly agitated. When we get to Raven’s dorm, she tells him to wait outside while we finish the interview in my car.

She tells me she wants to be a juvenile probation officer and work with kids in her old neighborhood, so she can tell them, “Hey, I came from the same place you did — look where I’m at.”

Meanwhile, her visitor has started yelling outside the dorm. Someone calls the cops. Raven jumps out of the car to see what’s going on. After a while, the guy is led away in handcuffs. Raven says she almost went to jail with him.

“What happened?” I ask when she gets back in the car.

Life. The old one keeps threatening to pull Raven back as she tries to build a new one.