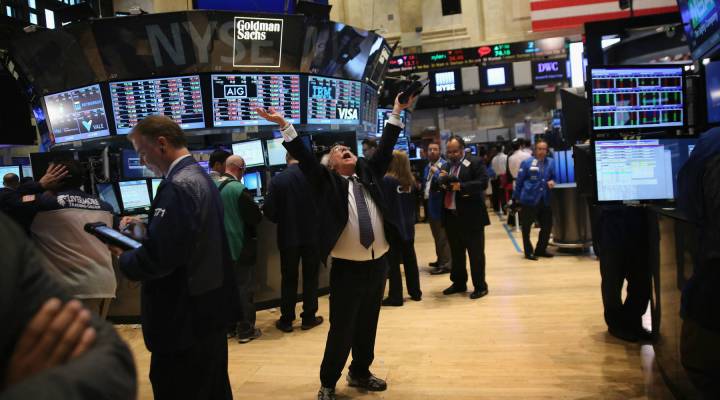 What makes a correction

Back in 2010, an inexplicably rapid crash in the U.S. stock market garnered the nickname the "Flash Crash." John Moore/Getty Images
Marketplace Whiteboard®

What makes a correction

Back in 2010, an inexplicably rapid crash in the U.S. stock market garnered the nickname the "Flash Crash." John Moore/Getty Images

The stock market looks great right now. The S&P 500 index is solidly above 2,000 and has been since February. The Dow Jones Industrial Average is hanging out around 18,000. These are breathtaking numbers, and to many they’re a case for concern. Financial reporting increasingly features words like frothy, toppy or over-bought. And, increasingly, the word “correction.”

A correction is what happens when a market goes ahead of itself.

The market can overreach for all sorts of reasons. Economic indicators can lead us astray and make investors too enthusiastic about the economy. A sudden rush of money into the market, for whatever reason, can make investors think they too need to put money to work, and that can inflate prices. And sometimes the market gets ahead of itself because investors haven’t got anywhere else to put their money.

That may be what’s happening today in the U.S. stock market. Interest rates are so low right now that investors are ruling out many of the places that they usually put their money. The real estate market is still rocky. Bonds and loans aren’t yielding much in interest. Commodities are in a slough. So there’s really only one place where asset prices are going up right now: equities. Which means there are three reasons the market is rising. First, because companies have been doing better, as the economy has continued to recover. Second, because the stock market is really the only place you can make money. Third, because the market is moving up, thanks to all that money flowing in.

The first reason is a good motive for investment in stocks. The second and third are good reasons to prepare to man the lifeboats. Money that’s in the market because there’s nowhere else to be and money that’s in play because it’s following the trend is the very definition of “hot money.” That is, money that will flow very quickly from place to place. As soon as something looks hotter than stocks, that money is gone. And what happens to the stock market when all that money leaves? It falls. Or corrects, in other words. But not too far. Just to where reason kicks in again.