The subways of New York echo with lots of different sounds — the footsteps of commuters, the rumble of trains, announcements about arrivals and departures — but occasionally, through the din of the daily commute, there breaks through the sound of a musician performing on the subway platform.

And for those musicians who make some or all of their living underground, it can be a hustle trying to eke out a living based on tips from commuters. There’s another challenge, too. Choice times at some of the busiest subway stops in New York are available to performers only after they pass an audition.

Run by the Metropolitan Transportation Authority, Music Under New York is a program that schedules performers for events throughout the city, including regular time slots at some of the prime subway stations like Times Square or Grand Central. Every year, hundreds of musicians submit CDs for the chance to score a live audition. Come audition day, 70 were given the opportunity to perform live, with just 20 to 25 spots available on the roster.

For those who make the cut, there are perks. MUNY groups receive an official banner and can reserve performance space at some of the most popular subway stations during high-traffic hours. And that means dollars.

Alex Steyermark, a film and music producer, has hired some of the performers out of the program. He has also seen first hand just how lucrative a couple hours in the subway can be. He remembers a particular recording session when two musicians used their break to perform in the subway. “They came back two hours later with $1,000. And I was like, ‘Wow, that’s like how to earn a living as a musician,’ ” Steyermark says.

MUNY musicians also avoid any run-ins with the police. Legally, musicians can perform anywhere in the subway without a formal permit. But there are rules about amplification and volume that can get tricky, and sometimes that leads to performers being ejected from the subway or arrested (though law enforcement understands that groups performing under MUNY banners have been pre-approved to perform).

It’s why Daniel Duke’s jazz ensemble decided to audition this year, even though they’ve already been performing in the subway for years. “We don’t like to deal with cops that come and kick us out or give us tickets or stuff like that. It really messes up our day and our vibe,” Duke says.

But aside from the day-to-day perks, many of the musicians are thinking about the larger value of being part of the program: exposure. “We would love for this to lead to … just a passerby to be like ‘Wow, I’m really interested in that.’ And then allowing that to give us bigger and better shows,” says a singer who performs as Lachi in an all-female a capella group, Femme Rhythm. They’re hoping that a spot on the MUNY roster will mean reaching a much larger audience.

And ultimately, that’s what a lot of the groups want out of passing the audition. The hope is that maybe the next big gig will come from one of those subway commuters. 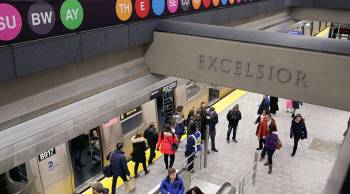