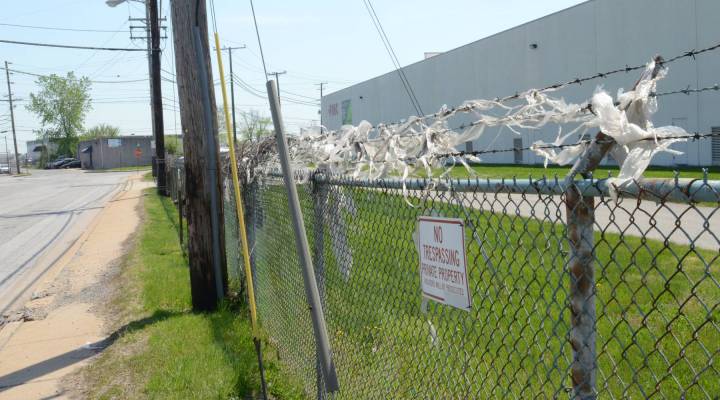 COPY
The outside of the shuttered FMC Corp. plant in Baltimore. The plant used to produce insecticides and other agricultural chemicals, but in 2008, the company moved its operations overseas to save costs. About 150 employees were laid off. Caitlin Esch

The outside of the shuttered FMC Corp. plant in Baltimore. The plant used to produce insecticides and other agricultural chemicals, but in 2008, the company moved its operations overseas to save costs. About 150 employees were laid off. Caitlin Esch
Listen Now

Like many cities, Baltimore is dotted with the ghosts of industry: businesses, large and small, that have moved elsewhere or closed altogether.

There’s the old FMC Corp. campus in Fairfield, its the lawn still neatly trimmed, but the parking lot is empty, and the property is ringed by fences and “No Trespassing” signs. FMC left Baltimore in 2008, part of a cost-cutting move.

The Globe Screen Printing building is on Hollins Street, right across from St. Peter’s church, where Babe Ruth was baptized. Globe Screen, a family business, closed about 12 years ago.

A Bank One check-remittance center on East Fayette Street has been turned into Baltimore City Health Department building. It closed several years ago, primarily because people stopped writing so many checks.

What these businesses have in common is that each of them was located within one of Baltimore’s poorer neighborhoods, which, in the ’90s, were part of a citywide and federal effort to turn disinvested neighborhoods into “neighborhoods of choice.”

In December 1994, Andrew Cuomo, then an assistant secretary with the Department of Housing and Urban Development, stood at a podium to announce the names of six cities that had been chosen to take part in an ambitious federal push to alleviate inner-city poverty. The Empowerment Zone program awarded a $100 million block grant and a package of tax credits for businesses and employers to the six. Seventy four cities applied, but Baltimore put on a show, dispatching a caravan of school buses and a marching band to Washington to deliver Charm City’s application.

The winning cities, New York, Chicago, Atlanta, Baltimore, Detroit and Philadelphia-Camden, had some leeway in how they’d use the funds, which were to be spread out over a decade. For Baltimore, job creation and job training in the poorest neighborhoods (called Empowerment Zones) were priorities. Twenty years later (and 11 years after the program ended) Baltimore’s effort offers both successes and failures.

The money was dispersed with an eye to getting people to work. Thirty-five million went to workforce development, including career centers and job training. About $27 million went to job creation efforts, including small business loans. Another $13 million focused on quality of life rather than jobs, financing home improvements and cleaning up lead paint.

Baltimore kept detailed records of how the money was spent, and in 2005, researchers at the University of Baltimore’s Jacob France Institute tallied up the number of jobs created within the Empowerment Zones. In total, the report says 5,777 jobs were created. Over time though, many of those jobs have left Baltimore. Small businesses, listed as the recipients of tax credits or loans in HUD reports, have shut down. Some larger industries have moved their operations overseas.

Some areas of the city, though, have been transformed. In 1997, Sylvan Learning Systems relocated its headquarters to the Harbor East neighborhood, which at the time was industrial and largely empty. Today, Harbor East is a vibrant area of retail and restaurants. Sylvan, now Laureate Education, is still there.

But in the poorest neighborhoods, job creation has remained elusive. Unemployment and poverty rates remain high.

Sandtown-Winchester drew attention earlier this month as the blight-ravaged home of Freddie Gray, a young man who died in police custody, sparking protests that grew violent in some places.

A Marketplace analysis of census data shows that during the decade of Empowerment Zone funding, the unemployment rate in Sandtown-Winchester was 18 percent. In 2013, data, which includes the recession years, shows an unemployment rate of 22 percent.

Diane Bell-McKoy, the CEO of Associated Black Charities, was chair of the Empower Baltimore Management Corporation, the nonprofit entity set up to distribute the federal money. She sees some successes, but the failures haunt her.

The boarded up homes and lack of stores in Sandtown-Winchester would seem to attest to that. Still, the Empowerment Zone money did lead to a personal transformation for one Baltimore individual.

Antoine Bennett, a 44-year-old lifelong Sandtown-Winchester resident, had just finished up a three-and-a-half year stint in prison when the Empowerment Zone funds were made available.  The zone joined with other community development efforts. Bennett took advantage of them, finding a job at a youth center, taking college courses, feeling the pride of being called Mr. Bennett instead of a prison number. He hasn’t missed a paycheck since. He considers neighborhood transformation a full-time job — his.

Bennett is now an outreach minister at New Song Community Church in Sandtown-Winchester.

“Our goal is to build up strong men of character in this community,” Bennett says. “That the world can look and say, ‘In that community, it is easy for them to go from ex-con to icon in a very unique way. It’s the evidence that the ill-fated are truly illuminated in that community.’ “