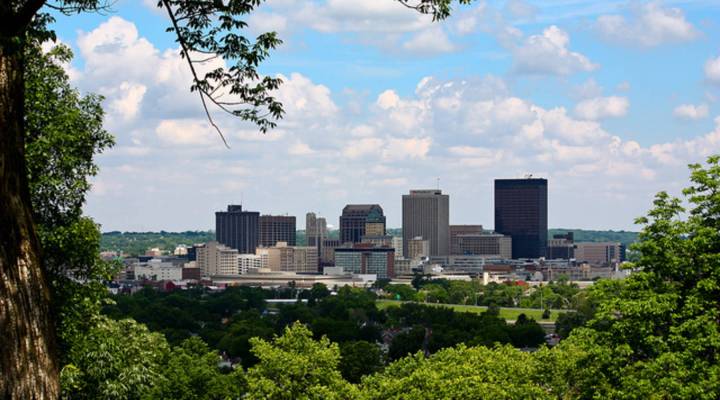 A call for responsible banking in low-income neighborhoods

COPY
A picture of Dayton, Ohio. In Dayton, city leaders are hoping a newly-passed ordinance will pressure banks to change their practices, and reinvest in neighborhoods that have become banking deserts. Ayrcan/Flickr

A call for responsible banking in low-income neighborhoods

A picture of Dayton, Ohio. In Dayton, city leaders are hoping a newly-passed ordinance will pressure banks to change their practices, and reinvest in neighborhoods that have become banking deserts. Ayrcan/Flickr
Listen Now

“Redlining” is when banks in lots of U.S. cities refuse to make loans or provide services in some neighborhoods—often low-income neighborhoods with high populations of immigrants and African Americans. The practice was officially ended in 1977, with a federal ban known as the Community Reinvestment Act that also encouraged banks to reinvest in poor areas.

But now some cities are saying those regulations are not doing enough: New York, Seattle and Dayton are among the cities that have passed their own ordinances to push banks to invest in low-income neighborhoods and avoid predatory lending.

In the Westwood neighborhood on the west side of Dayton it’s hard to find a bank. A PNC branch closed in the area in 2013, and now this is what’s called a banking desert. Donna Preston, who’s hanging out on a stoop nearby, confirms this.

“I’m not mobile, I don’t have a vehicle, so it is kinda hard to get to banks,” Preston says. The isolation makes things tricky for her business. “I do hair for a living. I have a business called ‘Donna’s Soft Touch Braids.’”

She takes the bus to her credit union—but she runs her business mostly in cash.

West Dayton is like a lot of neighborhoods around the country—it’s seen bank branches pull up and leave. Katy Crosby, who heads the city of Dayton’s Human Relations Council, says this is a big problem.

Dayton’s new socially responsible banking ordinance is simple: It tells the banks that if they want Dayton to deposit city funds with them, they’ll have to show that they’re investing in low-income neighborhoods, and complying with requirements under the Community Reinvestment Act.

Rob Rowe is with the American Bankers Association and doesn’t support the ordinance. “Banks are not utilities, they’re not charities, they’re businesses. They’re created and established as business organizations” he says.

Rowe is worried that a variety of ordinances from different cities creates unnecessary hoops for banks to jump through.

Dayton will need to get people like Rob Rowe on board, though. The ordinance, like those in other cities, is really just evaluation guidelines as opposed to actual regulations that could compel banks to behave a certain way.

Still, Jesse Van Tol is hopeful. He’s with the National Community Reinvestment Coalition, an organization that wrote a template for these city ordinances.

“It is a law that over years and decades will make a difference,” he says. “And I think you see that in the historic impact of a lack of investment.”

He gives Ferguson, Missouri as an example of that lack—it was redlined, and for decades whole black neighborhoods were blocked from banking services like home loans.

“The same is true with many neighborhoods in Baltimore,” he says.

Dayton city government passed its ordinance with a unanimous vote, and it goes into effect May 22.