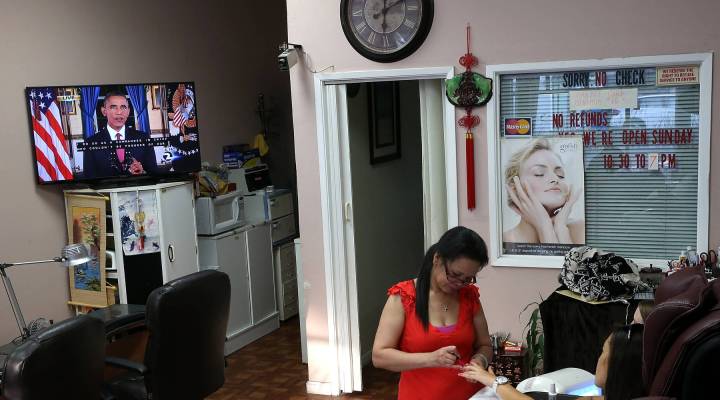 Pulling back the curtain on the manicure industry

Pulling back the curtain on the manicure industry

The New York Times pulled back the curtain Thursday on a slice of the economy that’s been hiding in plain sight.

It’s a story about stolen wages, worker mistreatment, and the role the rest of us have in it:

On a morning last May, Jing Ren, a 20-year-old who had recently arrived from China, stood among them for the first time, headed to a job at a salon in a Long Island strip mall. Her hair neat and glasses perpetually askew, she clutched her lunch and a packet of nail tools that manicurists must bring from job to job.

Tucked in her pocket was $100 in carefully folded bills for another expense: the fee the salon owner charges each new employee for her job. The deal was the same as it is for beginning manicurists in almost any salon in the New York area. She would work for no wages, subsisting on meager tips, until her boss decided she was skillful enough to merit a wage.

On the racial and ethnic hierarchies in salons:

Koreans, typically young and beautiful women, are paid the most. Following them are Chinese, and below them are Hispanic women or men and other races … I met Hispanic workers who only they were not allowed to speak a word for a 12-hour shift, while the Korean women could chat freely.

On conditions and housing:

So [the employees] wait on the street corners in the morning for these vans that pick them up and take them there, and sometimes they come back at night. Other times, when they are a little bit too far to commute, they actually sleep in a barracks provided by the salon owner, sometimes above or below the salon or in a house nearby – really piled up – and some of them even have to pay rent for this … They live for weeks or even a month in these barracks and they see their family very, very sparingly.

As the nail salon industry booms, its workers pay the price