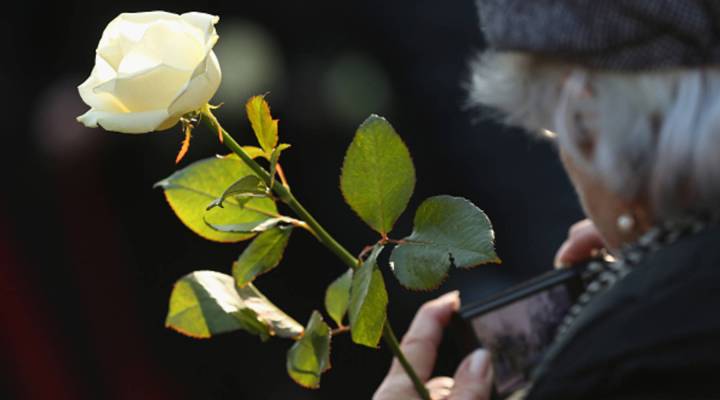 The “green” movement is headed underground — to the grave, that is. More and more cemeteries around the country are offering burial options that use fewer materials and less energy; some are landscaped with native plants and trees. These simplified burials can also be cheaper, but there’s often a catch.

At a dedication ceremony for the St. Kateri Preserve at Calvary Cemetery in Dayton, Marge Devito and her husband Bill watch as a priest blesses the site. Bill has a terminal illness—and they love the idea of burying him in a nature preserve.

“This is exactly what Bill wanted,” says Marge. He had been planning to be cremated and have his ashes scattered, because he wanted something simple, but their kids insisted that he should have a grave site they would be able to visit. When they came to Calvary and learned about the planned nature preserve, Marge Devito says they jumped on it and bought two plots. “It’s just perfect.”

Right now the preserve actually looks like some bulldozed dirt on a construction site, but Judy Pavy, who sells plots for the cemetery, says she can picture it. “It’s going to have the wildflowers and native Ohio grasses, and I just envision butterflies and birds visiting.”

The preserve won’t require expensive vaults or underground liners—in fact, those will be forbidden, along with formaldehyde embalming, so the cemetery can get a certification from the Green Burial Council as a green cemetery. For those who want headstones, there will be boulders, as well as a stone wall near the path where people can have their names engraved.

But just like the conventional side of the cemetery, a green plot comes at a price—or a range of prices, actually. A meadow spot is the cheapest, but it gets no marker, and you can’t visit the exact grave site. For a spot by the path or the lake, patrons of the St. Kateri Preserve will pay more. A boulder or a stone engraving is another charge.

Of course, price differentials and upselling are standard in the funeral industry. What’s new is branding the options as “green.”

“What we call green burial is what our ancestors about 130 years ago called burial,” says Josh Slocum, the head of the Funeral Consumers Alliance, a national watchdog group. He’s concerned that green funerals will become an overpriced industry of their own—that people will be encouraged or even pressured to purchase natural embalming fluid and expensive biodegradable coffins as boutique items, showing a commitment to the environment. “Whereas really, it’s charging just as much money for fewer services and fewer products.”

Slocum’s not opposed to simplifying the burial process—if anything, he says pricing needs to be more transparent. Taboos around death sometimes make it hard to talk dollars and cents, especially in times of crisis. His advice to would-be funeral consumers? Do what feels right—and ask to see a price list.