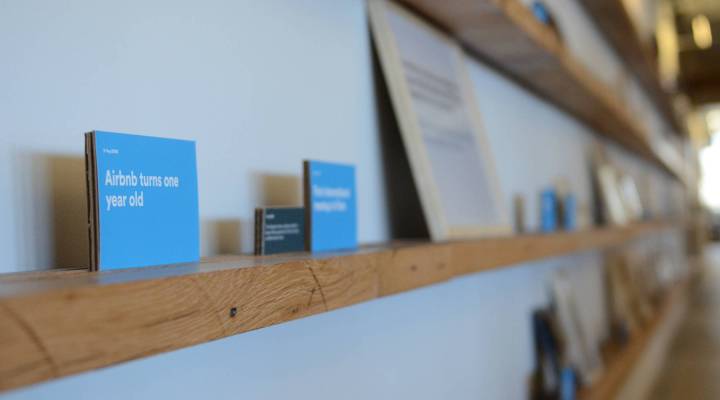 Brian Chesky is the 33-year-old co-founder and CEO of Airbnb, a company that he says may very well be “the worst idea that ever worked.” The website allows users to rent rooms, apartments, houses, and even yurts from people they’ve never met, all around the world.

Chesky and his roommate and co-founder, Joe Gebbia, came up with the idea in 2007. The pair couldn’t make rent and needed to come up with an idea fast. Luckily, a design conference was in town, something the two RISD graduates knew a little something about, and all the area hotels had been booked up. Chesky and Gebbia inflated a few air mattresses and rented them out to three people — the first three Airbnb customers.

Since then, the company’s grown rapidly. Chesky explained some of the company’s future plans while giving Kai Ryssdal a tour of its San Francisco headquarters.

Chesky on whether Airbnb is a tech company, a hospitality company, or a social media company:

On who Airbnb’s competition is, and isn’t:

We are primarily a new form of travel. As we’ve grown, hotels have grown. Hotels have record occupancy rates. And a lot of people, when we launched, thought we couldn’t coexist. But we are fundamentally a different way to travel. People stay in Airbnbs almost twice as long so it’s almost like a whole new behavior.

We’re definitely leaning more mainstream … now we’re one of the official housing providers for the Rio Olympics next year.

On criticisms about Airbnb’s effect on rent prices:

I’m totally sympathetic to the complaints. Ultimately, we want to enrich the cities we’re in. When we launch, these other externalities happen. That being said, I fundamentally believe Airbnb is a really good thing for the city of San Francisco, New York, many other cities.

The Airbnb offices consist of a mix of open work spaces and private conference rooms designed to look like real-life Airbnb rentals.

On how long he plans to stay at Airbnb:

Chesky names two people he admires – Walt Disney and Steve Jobs. “I think really great entrepreneurs, they do one thing and that one thing is so significant that that’s how they’re remembered and that’s what they do for a very long period of time.”

Airbnb uses one wall in their office as a timeline for major events in the company.

Earlier this month, Chesky was named one of TIME’s 100 Most Influential People. His profile was written by Jonathan Ive, senior vice president of Design at Apple.