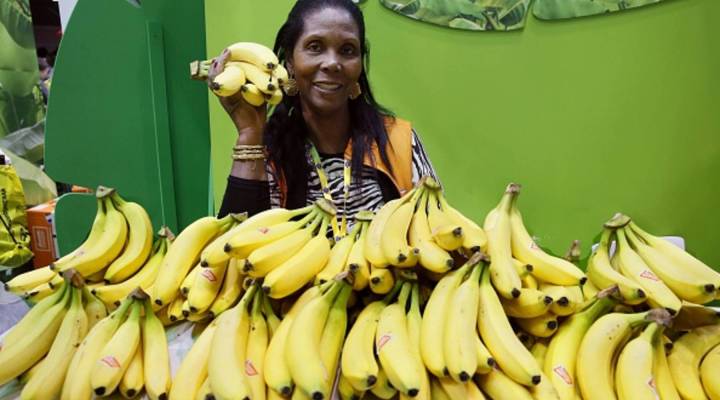 COPY
A woman stands with bananas during the 2015 edition of the Paris International Agricultural Show in Paris.  PATRICK KOVARIK/AFP/Getty Images

A woman stands with bananas during the 2015 edition of the Paris International Agricultural Show in Paris.  PATRICK KOVARIK/AFP/Getty Images
Listen Now

London-based trader Navinder Singh Sarao, and his company are accused of using software to manipulate the S&P’s futures contracts through a practice known as “spoofing.”

Spoofing means fooling the markets – making it look like you’re doing something, when you’re actually not. How about an analogy?

Imagine you have a booth at the farmers market, where you are selling bananas at two bucks a pound. Suddenly, this guy sets up an empty stall beside you and starts shouting about selling bananas for a dollar a pound. His truck is just coming up the street, he says – the bananas will be here in a minute. All your customers start lining up at his stall! It’s a nightmare!

So now you have to cut your price and sell your bananas for a buck a pound. You sell several boxes to a woman in a green hat. And suddenly, the guy beside you has disappeared! There’s no truckload of bananas coming!

You decide to raise the price back up to two dollars a pound again. When, suddenly, you get a phone call from your wife, who has spotted the truckload of bananas guy at the other end of the market. He’s selling bananas right out of the box, helped by a woman in a green hat. You have been spoofed! They fooled you into selling your bananas at half price, and now they’re selling them at two bucks a pound.