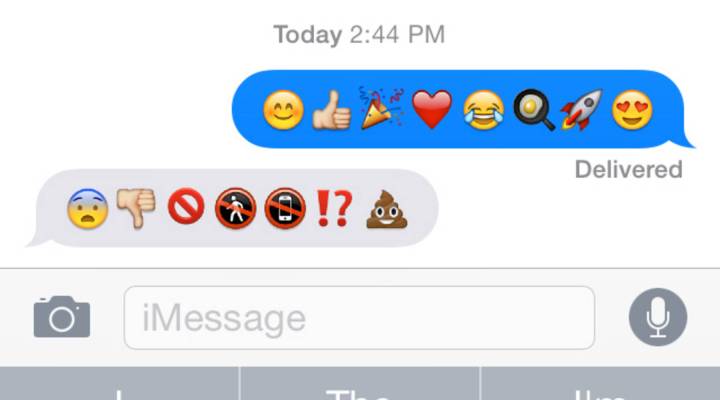 The year was 1982. The internet was in its infancy, and email had just opened up between universities. There was even a kind of social media, remembers Scott Fahlman, computer scientist at Carnegie Mellon University. You could send an email to a bulletin board to post it up. And just like today, sarcasm was rampant, and often misinterpreted.

“We would have these flame wars,” Fahlman said. “We felt maybe we needed a way to mark the posts that we put up that were just meant to be humorous.”

They considered using an asterisk in the subject line, but that wasn’t intuitive. Instead, Fahlman threw together three easy-to-find characters: a colon, a dash and a closing parenthesis. 🙂

“I thought, maybe people would turn their heads, and we could make a really nice face in that case,” he says.

Fast-forward a few decades and emoticons moved into work email, chats, and now text messages and tweets in the form of emoji. Fahlman doesn’t much care for the cats-with-hearts-for-eyes variant. But he says it’s a personal preference.

“People want to make this into a big crusade on my part and it’s not. I’m not a fan of the graphical emojis, no,” Fahlman says. “I think it took a little bit of creativity to figure out how to make a smiling face out of just text characters. And then for awhile people were inventing more and more complicated ones. Santa Claus and Abraham Lincoln and the Pope all being eaten by a python.”

An example of ASCII art.

For emoji fans, Fahlman’s perspective is less 🙂 and more :-/. But one thing is clear: pictures help us express emotion and intent where words alone can leave too much ambiguity: softening the tone of a work email, turning a straightforward text into a flirtation, or adding fire to a heated back-and-forth exchange on a message board. And with the vast number of texts, tweets, emails and posts sent each minute, that’s an important communicative tool.

Fahlman has worked as a computer scientist for decades, with an eye toward the development of artificial intelligence. Part of his legacy, though, is tied up in the expression of all these feelings, be they textual or graphical.

“I’ve reconciled myself to the idea that the first line of my obituary is going to be ‘Scott Fahlman who invented the email smiley face (and also made major contributions to artificial intelligence) passed away today.’ And depending on how old I am, I guess there will either be a smiley face or a frowny face on the tombstone.”