After blowing the whistle on Halliburton, his employer, to the SEC, Tony Menendez received a troubling email from his supervisor outing his actions to the entire department. In a partnership with ProPublica, we take a look at the 9 year battle that ensued, with Menendez fighting to prove the company unfairly retaliated against his actions.

The circulation of the Daily Breeze, a Torrance, California paper that won a Pulitzer Prize for local news reporting Monday. But Slate notes one of the reporters who spearheaded the Pulitzer-winning investigation was unable to make ends meet as a journalist, and now works in PR.

That’s the speed a Japanese magnetic train was able to hit, breaking its own world record. When fully functional, the maglev train will cut travel time from Tokyo to Nagoya by more than half. And as reported by the BBC, construction will top $100 billion.

A typical ATM withdrawal fee on so-called “release cards,” the prepaid debit cards issued to prisoners upon release, with any leftover money sent by loved ones. Cards are provided to prisons by outside vendors and their fees unregulated, Al Jazeera reported. One former inmate said said he was only able to spend about $70 of the $120 he had on his release card, because of fees.

That’s the percentage drop in the price of bullion since 2011. Whereas gold was typically thought of as the primary asset for storage of wealth, Laurence D. Fink, head of the world’s biggest asset manager, stated Tuesday that it has been surpassed by contemporary art…and apartments. As reported by Bloomberg, gold-backed ETFs make it less inaccessible to own gold, whereas inflating apartment prices in cities like London and New York put property ownership out of the reach of many.

That’s how many “workout” themed playlists are on Google Play Music, each of them curated by a group of people armed with discriminating tastes and a pile of big data. Turns out, even the largest streaming services rely on a human touch to make the best playlists—even algorithm-based services like Pandora. 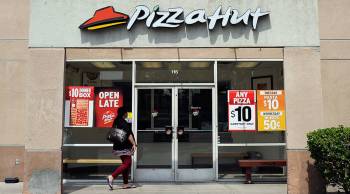 The Transaction: A tale of pizza and love