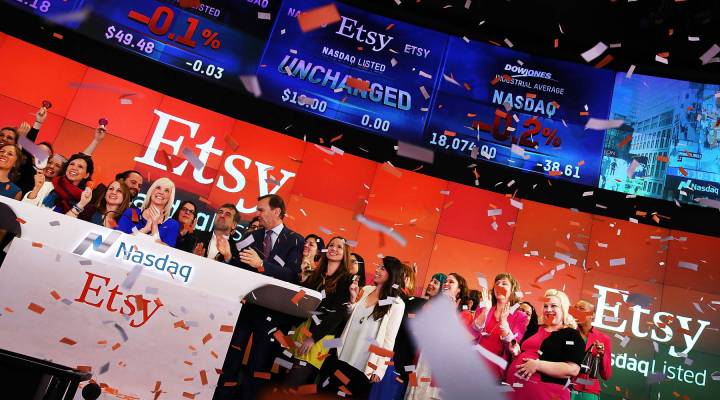 COPY
Employees and sellers of the online marketplace Etsy, stand with the CFO Kristina Salen on the floor of the Nasdaq as the company becomes a public company on April 16, 2015 in New York City. Spencer Platt/Getty Images

Employees and sellers of the online marketplace Etsy, stand with the CFO Kristina Salen on the floor of the Nasdaq as the company becomes a public company on April 16, 2015 in New York City. Spencer Platt/Getty Images
Listen Now

Ahead of its IPO, Etsy priced its shares at $16, with an estimated value of $1.78 billion. But Thursday saw those numbers explode, with shares opening at $31, which placed the company value at $3.4 billion.

The 10-year-old marketplace for vintage and handmade goods, is a ‘B Corp,’ or ‘benefit corporation’ – i.e it’s certified as a company that benefits the community. It’s notable because very few (Etsy is only the second) for-profit companies with B Corp certification go public.

“If it can do good for the community, for the consumer, for the vendors, it satisfies the B Corp requirement and gives them a good rating,” said Santosh Rao, head of research at Manhattan Venture Partners.

The other reason, Rao added, is strategic: “They need to keep the vendors happy. 80 percent of their business is repeat customers and loyalty is important for the company.”

Etsy’s vendors, however, are mostly small businesses that, on average, don’t make much more than the U.S. median income. That means they aren’t nearly as wealthy as those who typically invest in the stock market.

It’s always risky to buy stock in any company, Rao said, but “nothing wrong in having them come in and especially this one where they are committed to the community.”

Although Etsy hasn’t been profitable recently, the IPO is likely to help, according to Rao. It would help them raise the money to grow bigger and expand beyond the U.S.

But the bigger Etsy gets, the higher the chances of its business becoming more commercial. That could be a problem since many, including Rao, believe its loyal customer base is the result of its stated mission to promote the opposite: artisanal goods and small, community-based businesses.

“It was designed originally for that,” said Rao. “It wasn’t meant to be a big, high-scale commercial operation and that’s where they made the market.”

Etsy could keep the commercialism at bay, said Rao, because it was a ‘B Corp.’

“They don’t have to necessarily look at the bottom line every quarter,” he said. “In the end they have to show a path to profitability to show they they are a good business but there’s no near-term, absolute imperative to show a profit.”

But even Rao believes there’s a strong likelihood of it being bought over by a bigger company. “I’ll give 60 percent odds that they will be acquired,” he said.