What happens when two bank accounts get married

What happens when two bank accounts get married

It’s officially wedding season. It’s a romantic time of year, but it can be a pricey one too, whether you’re dressing up and shelling out for a hotel and a gift, hosting a bridal shower or bachelor party, or planning (and paying for) the wedding itself.

“I do” also means ka-ching — for venues, flower ships, bakers, caterers, the list goes on and on and on.

Money isn’t the most romantic topic of conversations, and some couples may want to put off the financial talk until after the honeymoon. But is that the best bet? Probably not, according to Louis Barajas. He’s a certified financial planner who works with many couples as they approach marriage. Barajas stresses the importance of transparency — from financial history, debt and credit scores to goals for a financial future. He says it’s important to have these conversations early and often, to keep things open.

That’s exactly what Rob Luchow and Jessie Rosen did before they got married almost a year ago. For Rob and Jessie, talking money before tying the knot was a natural part of the process; they already lived together and had been splitting their expenses pretty evenly, but as Jessie changed career paths to become a full time writer, Rob took on more of the financial burden.

The couple decided to meet with a financial planner shortly before they got married to help ease the process. Keeping the business talk separate from the emotional part of their relationship (and mediated by an objective third party) was a relief for Rob and Jessie.

A year into marriage, they’ve settled into a rhythm with their finances, keeping their money active in savings and investments, and working together to work out their priorities in the short term and the long term.

That’s meant sacrificing a little bit now to invest in the future — Luchow and Rosen put off their elaborate honeymoon and a potential move to a new apartment in order to save. That means they can maintain their current standard of living without a strain and also save up for their future house. And according to their financial planner, stasis at the beginning of a marriage can be good, at least when it comes to spending.

Hear Jessie and Rob’s full story, and more advice from Louis Barajas, in the audio player above. 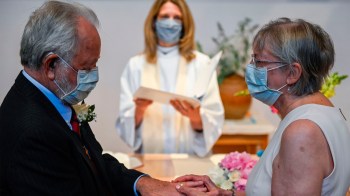