David Cross releases film on ‘pay what you want’ basis

David Cross releases film on ‘pay what you want’ basis

Actor and comedian David Cross has entered the directorial game with an independent feature film called “Hits,” and he’s releasing it on a pay-what-you-want basis through BitTorrent.

Rather than follow the traditional route of independent film releases, Cross has decided to cut out sales agents and distributors in hopes of reaching a broader audience.

“The offers for this kind of movie, a low-budget indie with no real recognizable stars, were the very traditional idea of… ‘You play for a week in LA and New York, and maybe three other cities,'” says Cross. “Then it’s straight to video on-demand and Apple iTunes. That wasn’t appealing to me.”

Instead, he teamed up with BitTorrent and the video-streaming site VHX to offer a bundle that will include interviews, videos and photographs.

BitTorrent has been closely associated with online piracy, but the file-sharing service has been making an effort to go legit. “Hits,” a black comedy that satirizes millennial fame seekers, is the first feature film to be distributed through a BitTorrent Bundle.

Cross is glad that his film is available online, but he also wants people to experience it in a theater. That’s why he created a Kickstarter campaign that surpassed its $100,000 goal to fund the film’s screening in 50 cities across the U.S. and Canada. These screenings will also be pay-what-you-want.

Watch the “Hits” trailer below.

A few rewards offered by Cross on the “Hits” Kickstarter page:

“The Last Blockbuster”: Previewing our May documentary film selection

David Brancaccio reacts to “Through the Night” 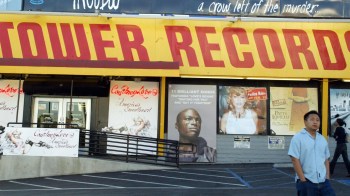