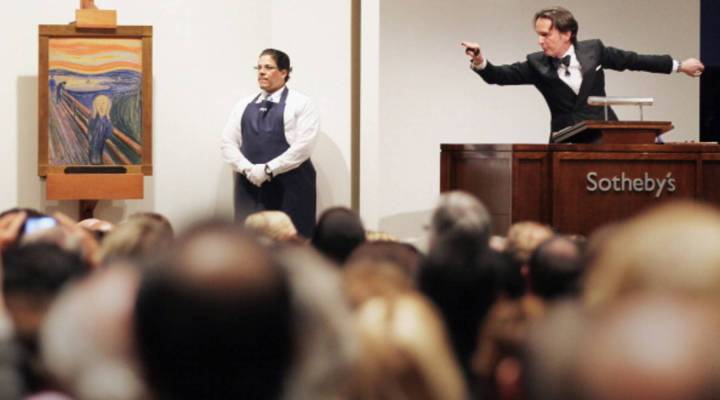 The business side of the high-end art world is as dramatic as a Baroque masterpiece – lots of light and shadow.

“Where insider trading is against the law in the financial markets, it is completely legal and actually frequently practiced in the art world,” says Michael Plummer, a founder of Artvest Partners, an art advisory firm. Previously, he was COO of Christie’s Financial Services, and also worked with Sotheby’s for years.

“That’s kind of the game of playing in the art world is that if you are an insider, and you have inside information, then you tend to capitalize on it,” he says. And dramatic life events cause works of art to end up at auction houses in the first place.

“Death, divorce and debt. These are the main consignors,” says David Nash, a co-owner, with his wife, of the Mitchell-Innes & Nash galleries in Manhattan. Before the gallery, Nash spent 30 years at Sotheby’s overseeing paintings, so he well knows how that same drama can trickle down, or up, to the staff.

“It was pretty high pressure when I left. Now it’s 10 times worse,” he says. “Soon as you’ve had one $400 million dollar sale, you’ve got to take the phone call the next morning for the next one.”

And both auction houses seem like they’re giving in to some of that pressure, considering Christie’s is replacing its CEO, Stephen Murphy. Sotheby’s CEO, William Ruprecht, who served for 14 years, is also stepping down. Both companies want to become more profitable.

“What is making them less profitable is the intense competition between both houses,” Nash says.

While there are plenty of high-end pieces of art, only two auction houses can handle works of a certain worth. That means there’s often an auction before the auction when the two houses are bidding against each other as they try to offer better deals and land the customer.

And it can seem worth it, for either Sotheby’s or Christie’s to do what whatever is needed to lock down a deal to sell a headliner work of art, except it’s not, Plummer says.

“They just don’t make the kind of money that you think they do. When you see those hundreds of millions of dollars of sales, they’re not bringing in the money that people expect that they are, and that I know is a shocking thing to a lot of people.”

Even if you sell a $140 million painting, most of the commission may be given away to the client. Auction houses also offer guarantees that can sound an awful lot like gambling. To secure high-ticket items, the house may guarantee a minimum sale price. But if that sale doesn’t go through, the house is stuck buying that very same, and very pricey, piece of art. One of the problems Sotheby’s is facing, Plummer says, is too much focus on high end sales – the kind that often come with guarantees.