Why buy a ticket for the Titanic after it has struck an iceberg?

It’s a question that some analysts are asking Lithuania after the tiny Baltic state became — at the beginning of this month — the 19th member of the European Union to join monetary union and adopt the euro.

Ten years after joining the European Union, and almost 25 years after declaring its independence from the Soviet Union, Lithuania is doing well. The economy is growing at a healthy rate of 4.3 percent per annum, the budget deficit is way down, and government debt to GDP is among the EU’s lowest. So why put that at risk by joining a currency zone which is mired in crisis, deflation and recession and could even break up? Why clamber aboard a sinking ship ?

“Lithuania was already on the Titanic,” explains Andy Birch of IHS Global Insight. “Lithuania’s currency, the litas, was tied to the euro, so if the euro collapsed it would have dragged down the litas with it anyway. By joining the eurozone, at least the Lithuanians can have some say in the management of the euro. And they do now have the backing of the European Central Bank.”

Many Lithuanians don’t agree. 40 percent were opposed to euro membership. Some even staged a mock funeral for the litas this month with a coffin and mock mourners, lamenting the death of their national currency and the loss of sovereignty that it entails. Lithuania can no longer devalue its own money or even set its own interest rates. Opponents of euro membership fear that Lithuania has surrendered the power to fully manage its own economy.

But Simon Tilford of the Centre for European Reform says that one of the main reasons for Lithuania joining the eurozone is political rather than economic. It’s motivated by fear of the old occupying power on its doorstep.

“All of the Baltic governments believe that eurozone membership will help protect them against Russian aggression,” he says.

Already a member of the NATO alliance, Lithuania wants to embed itself even more securely in the west to ward off the Russians.

“They are brutal and aggressive,” says Lithuanian President Dalia Grybauskaitė. “We lived with this neighbor for 50 years under occupation and we never, never ever will allow anybody to occupy us once more. “

Here is a real irony: Lithuania is giving up some of its sovereignty in order to guarantee its independence. 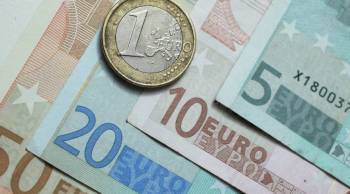