Restaurants shell out for high-priced scallops

Restaurants shell out for high-priced scallops

This year, some fishermen are calling them white gold. What are they? Scallops, of course.

Freshly harvested scallops are plump, firm and should have still-twitching adductor muscles. That’s right. According to Rod Mitchell Browne, the owner of Browne Trading Company, a seafood business in Portland, Maine, “A fresh scallop always moves. The muscles kind of quiver when you first cut them.” He adds, “You can eat them raw very easily.”

Scallop season in Maine runs for only 70 days during the frigid winter months. Here, almost all of these valuable bivalves are harvested on boats that go out and come back on the same day. Their catch is called dayboat scallops. People around the country swear the most delicious scallops are from the state’s rugged coastline, even though Maine represents only around 1/100th of the total U.S. sea scallop industry.

But this year, if you love Maine scallops, you’ll pay for your expensive tastes.

Mitchell says fewer than 1 percent of Maine scallops stay in the state. Most dayboat scallops he buys are shipped within 24 hours of being landed to some pretty fancy out-of-state places like like Le Bernardin and Daniel in New York City, or French Laundry in Napa Valley. But this year, Maine dayboat scallops won’t stay on menus for long.

That’s because five years ago, the state implemented new catch limits to protect the valuable fishery after stocks reached historic lows. This year, fishermen who operate Maine’s 400 day boats say they’ll probably exhaust quotas by late January, well before the season officially ends. And that means some fishermen are getting a big payday. Maine’s Department of Marine Resources says in the past five years, prices paid to fishermen have increased each year, hitting an all-time high of $15 a pound this season.

Togue Brawn is the owner of Maine Dayboat Scallops in Portland, Maine. She buys freshly harvested dayboat scallops from fishermen Obie Spear, which she ships out as fast as she can to places around the country. Today, Spear brings in 83 pounds of scallops and he gets a check for $1,252 bucks for his “white gold.”

Brawn ships those scallops to appreciative customers like Chef Andrew Gerson, at Brooklyn Brewery in New York. He says Maine dayboat scallops are “almost like candy. I mean, there’s this real level of sweetness that I think offsets the salinity.” Chef Gerson willingly pays between $20 to $28 dollars a pound.

And his customers don’t seem to mind. For some things, the price is worth it. 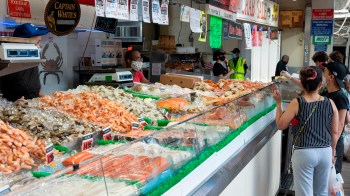