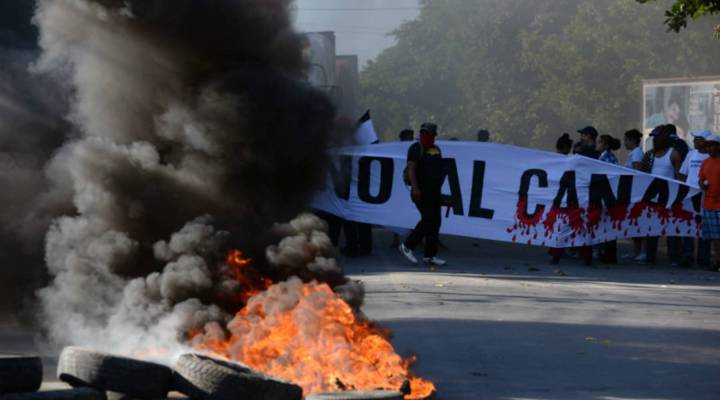 COPY
A banner that reads "no to the canal" is carried this week during a protest against a new canal opening in Nicaragua.  STR/AFP/Getty Images

A banner that reads "no to the canal" is carried this week during a protest against a new canal opening in Nicaragua.  STR/AFP/Getty Images
Listen Now

Nicaragua has broken ground on a nearly 200-mile shipping canal that will carve the country, including Lake Nicaragua, to link the Pacific and Atlantic oceans.

The Nicaraguan government says the canal will create jobs and investment that will lift the country out of deep poverty, but plans for the project have been accompanied by considerable skepticism.

The idea for a cross-Nicaragua canal is 200 years old, yet every time plans have been put into action, they have failed. Jean-Paul Rodrigue, a Hofstra University professor who studies global trade and transport, says Nicaragua is probably attempting it once again because a Hong Kong-based firm is raising a reported $50 billion to get the job done. “Nicaragua has a lot to benefit out of this, without forking [over] any of the capital,” Rodrigue says.

The benefits for ordinary Nicaraguans remain to be seen. The promise of jobs that have yet to materialize may be further undercut by worries over the environmental impact on Lake Nicaragua, the largest freshwater lake in the region. Pedro Alvarez, who teaches civil and environmental engineering at Rice University, says he fears that dredging Lake Nicaragua, a vital source of drinking and agricultural water, will lead to ” dead zones. “