Remember those horrendously tacky sweaters your mom or grandma used to wear around Christmas?

They’re having a renaissance moment, believe it or not, thanks in part to the rising trend of ugly holiday sweater parties.  It’s created a booming industry for some in recent years, as college students and businessmen alike look to snatch up the most festive shrug they can find.

But before invites to these parties started popping up on Facebook, there were people who actually wore these things without the slightest hint of irony.

I asked her to show me her favorite ugly Christmas sweater. Yes, she has more than one. “On one side there is a church, and on the back there are some angels and it’s supposed to be representative of the song ‘Silent Night,’” she says, holding up her light-blue knitted cardigan.

Believe it or not, mom is selling this sweater short. The Christmas trees, angels and church on the sweater are all adorned with hand-sewn silver and gold beading. “You glisten when you walk!” says mom, when asked why she likes wearing it.

Twenty years ago, mom says a Christmas sweater like this one would cost about $100. It’s these kinds of sweaters that Mike Golomb is after. He’s the founder of uglysweaterstore.com.

“It was a very expensive sweater back in the day, which is why they last so long now,” Golomb says. “To have a sweater that’s 30 years old now, I guess, is a testament to how well they did make them.”

Golomb has been in the ugly sweater business for six years. He usually buys vintage sweaters in bulk from clothing recyclers and resells them for anywhere between $10 and $100. It’s a side job for him, Golomb manages housing for a university in St. Louis, but he says if he wanted to quit his main job, he could, thanks to the growing ugly Christmas sweater party trend.

“It just seems like it’s a trend that just continues to grow,” he says. “It used to just be the college kids or somebody in their twenties. Now we started to see more corporate parties last year, and then this year that’s just exploded.”

Golomb says 95 percent of his business falls in the eight to 10 weeks before Christmas. Jack McCarthy says that’s about the same for his sweater business, ultimateuglychristmas.com. “I’m spending a lot of the summer getting ready, finding the inventory, you know, doing the operational side of it,” he says.

When he’s not selling sweaters, McCarthy is a student at Babson College near Boston. He sold his first ugly sweater on eBay when he was in eighth grade and found big demand.  McCarthy says last year he brought in around $50,000. Not bad for a college kid.

“I can do all the work during the summer and then run it online now,” he says.

But both McCarthy and Golomb say selling sweaters this year has been more difficult because more big-name retailers like Target, Wal-Mart and Macys have gotten into the Ugly Sweater business. Even major sports leagues like the NFL and NBA now have their own lines of ugly holiday sweaters.

“It’s hard,” says Golomb. “It’s kind of like you’re a mom-and-pop shop and then Home Depot moves to town.”

McCarthy says he’s seen traffic to his website drop a little as it’s fallen on the Google search options behind these big-box stores, but he says he’s used social media to raise his sweaters’ profile.

“People share the pictures, find them funny and share the site, so word of mouth advertising has been helpful,” he says.

Both McCarthy and Golomb say they’re looking to diversify the kinds of things they sell, and there are other holiday ugly sweater markets to explore.

Just ask my mom. “I have a St. Patrick’s Day sweater,” she says, “and an Easter sweater and a Fourth of July sweater.”

She forgot to mention her Halloween sweater and Thanksgiving sweater, too. 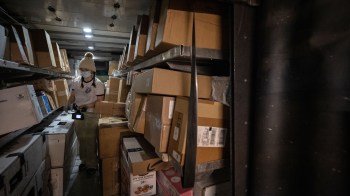